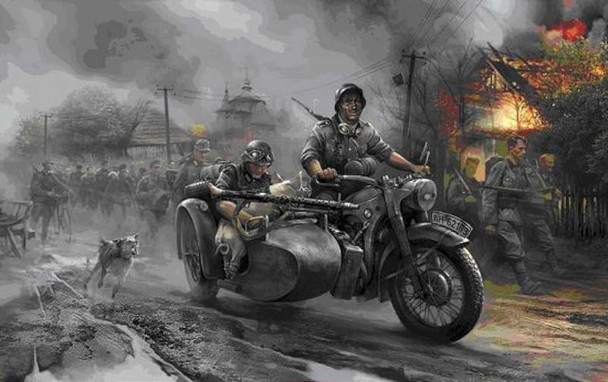 The German motorcycle of BMW manufacture - R-12 - was produced from 1935 to 1942. During that period more than 36000 BMW R-12 were manufactured in both military and civilian variants. The sports variant of R-12 reached a speed record of 279.5 km/h which was held for 14 years! Because of high reliability and significantly lower cost in comparison with other army motorcycles (such as the BMW R-75 and KS-750), the BMW R-12 became the most mass produced motorcycle in the German army. The R-12 was used for delivery of ammunition and hot food, evacuation of wounded men to the rear, delivery of messages, and reconnaissance. « less
View AllClose

MSRP:
Now: $38.73
Was:
RMS Titanic was a British passenger liner that sank in the North Atlantic Ocean in the early morning of 15 April 1912, after colliding with an iceberg during her maiden voyage from Southampton to New...

MSRP:
Now: $8.45
Was:
ZUTTER-Zutter Kutter Blade. Reversible blade for long lasting, trouble-free cutting. Up to 250 cuts per side, two cutting sides. This package contains one replacement blade for the Zutter Kutter...

MSRP:
Now: $7.28
Was:
Zutter-Tool It All Foam Pad. An anti-static, high density foam pad that provides the proper support during the cleaning process of metal dies, using the Zutter Tool-it-All (sold separately). This...