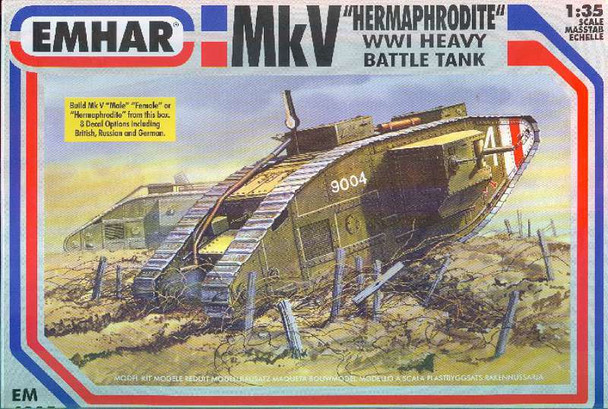 The British Tank of WWI (so named as it was given the cover name of water tank during development), was undoubtedly one of the more successful military weapons to come out of WWI. It was developed into several different variants, each based on improvements to the basic design. The terms 'male' and 'female' come from the armament carried. The 'male' tanks had large side sponsons carrying 6 pound guns, while the sponsons on the 'female' tanks were smaller and carried machine guns. The Mark V tanks had some made into 'hermaphrodites' in which one sponson carried the 6 pound gun and the other had machine guns. While not as esthetically pleasing, this did improve the versatility of the tank. Apparently all the tanks so converted were originally 'females'. A number of these tanks were used by early Soviet forces, having been abandon by either White forces or by the British Expeditionary Forces after WWI. The kit provides the option to build either a male, or female or hermaphrodite from the parts that come in the kit box. The tracks are a vinyl material that the instructions state can be easily glued together. The large parts have the part number cast in the back of the parts themselves. I also noted that most parts had ejector pin marks on them, but most, if not all, will be hidden after construction. Includes markings for 4 British, 1 German and 3 Russian tanks. « less
View AllClose

MSRP:
Now: $36.92
Was:
The Sherman in its many versions was the most widely used tank employed by the allied forces in World War II. Even today, several armies are still using this formidable tank. More than 40000 M4s were...

MSRP:
Now: $7.89
Was:
Use these binding wires with the Cinch Book Binding Tool (sold separately) to create your own books, journals and more! This package contains four .625x12 inch binding wires. Comes in a variety of...

MSRP:
Now: $12.54
Was:
This is the 1/72 scale WWI French Infantry plastic figures from The Military Museum Collection by Pegasus Hobbies For ages 8 years and up FEATURES: Authentically detailed plastic pieces molded in...

MSRP: $18.50
Now: $17.10
Was:
During WWII the British Army needed to provide mobility for paratroopers who had been dropped behind enemy lines; their solution was the folding airborne bicycle (according to some known as the...