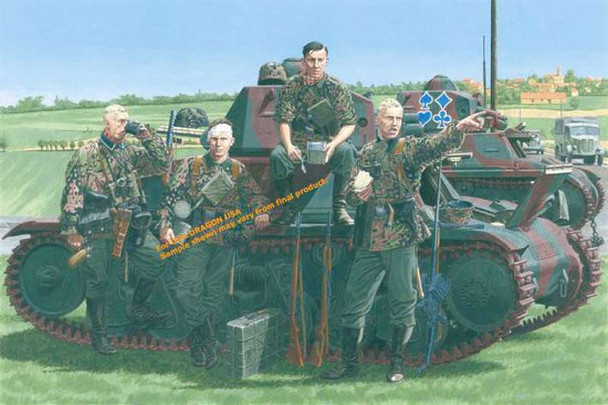 Infantry Model Figures by Dragon. 1/35 German Das Reich Division, France 1940 (4 Figures Set) This release shows four German figures from Das Reich as they would typically have appeared in the French campaign. They come in very casual poses as they enjoy a bite to eat or a welcome drink after a long march, or perhaps they are relaxing after an intense firefight. A particularly unique feature of these figures is the camouflage smocks they are wearing, for such apparel wasn't widespread at this stage of the war. About the 'Das Reich' Division: One of the most famous German divisions of WWII was Das Reich, composed of some of the best-trained and battle-hardened troops the nation could provide. Its famous symbol was the wolf's hook (or Wolfsangel) rune. First combat for the division was the Western campaign in 1940. Das Reich was involved in the drive towards the Dutch city of Rotterdam, before subsequently transferring to France and attacking towards the French capital. By the end of this Blitzkrieg campaign, the Das Reich Division had advanced as far as the Spanish border. « less
View AllClose

MSRP:
Now: $17.50
Was:
This is a 4 figure set. Made from high quality resin. The set depicts two Wehrmacht infantrymen capturing two bewildered French tank crewmen in the time period of June 1940.

MSRP:
Now: $16.12
Was:
History Background For Nazi Germany and soviet Russia, the war in the East had reached a point of stasis. It would also contribute, in a profound manner, to the resolution of the wider conflict...

MSRP: $29.95
Now: $28.43
Was:
Infantry Model Figures by Dragon. The Phony War has come to an abrupt end as Germany unleashes its Panzer divisions against the Low Countries and France on 10 May 1940. Western Europe experiences...

MSRP: $93.95
Now: $72.01
Was:
Dragon has created a 1/35 scale kit of the phenomenally named Berge panther mit Aufgesetztem Pz.Kpfw.IV Turm Als Befehlspanzer. As one would expect, the kit utilizes principal components from...