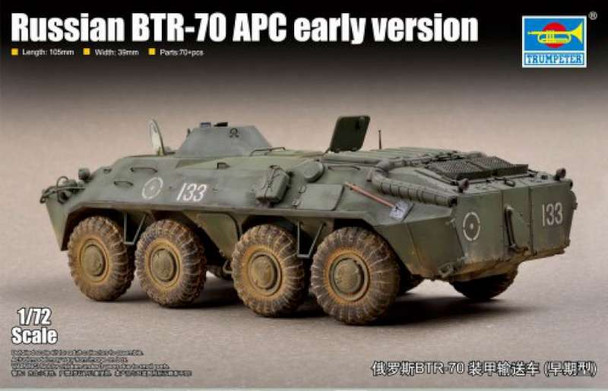 The BTR-70 is an eight-wheeled armored personnel carrier (Armoured Transporter) originally developed by the Soviet Union during the late 1960s under the manufacturing code GAZ-4905. On August 21, 1972, it was accepted into Soviet service and would later be widely exported. Kit has single piece lower hull, upper hull with engraved surface detail, molded on hatches, separate turret with PKT machine gun, jerry cans and other filigree accents, detailed running gear with rubber tires, decals and markings for 2 vehicles. « less
View AllClose

MSRP: $19.95
Now: $19.67
Was:
These kits are accurate representations of the featured military vehicle. The kits do not include glue or paints, but are made for quick and fun construction.

MSRP:
Now: $7.42
Was:
This seam ripper has a curved blade for easier cutting. Perfect for all your quilting and sewing needs. This 2.75x7.75x.625 inch package contains one retractable seam ripper. Imported.

MSRP:
Now: $8.22
Was:
Great for running fabric through footing of sewing machine. This 3x6.125 inch package contains one pair of fabric tweezers. Imported.

MSRP:
Now: $7.06
Was:
CLOVER-Straight Tailor's Awl. Use this for piercing small and even holes. It will also help ease fabric trough the plate for machine stitching. This package contains one metal and plastic tool...

MSRP:
Now: $18.28
Was:
A high quality model kit of the French Army AMX-30 battle tank from Heller. The tank, in service from 1966 to present day, was equipped with a 105-millimetre cannon, capable of firing an advanced...