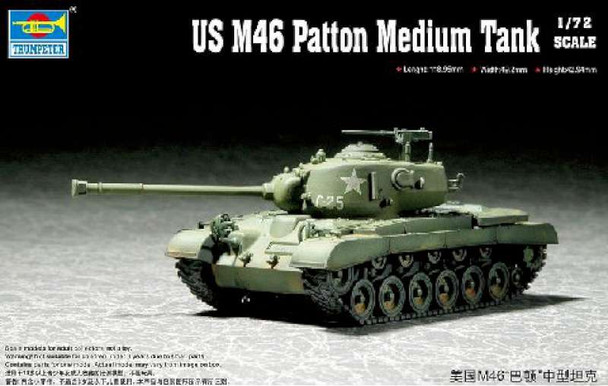 M-46 Patton Model Vehicle by Trumpeter. The M46 was an improved M26 Pershing tank and one of the U.S army's principal medium battle tanks of the early Cold War, with models in service from 1949 to the mid 1950s. The M46 tank was designed to replace the previous M26 Pershing and M4 Sherman. On 30 July 1948, standardized the M46 and named it the General Patton, in honor of General George S. Patton Jr. It was not widely used by U.S. Cold War allies, being exported only to Belgium, and only in small numbers to train crews on the upcoming M-47. « less
View AllClose

MSRP:
Now: $20.13
Was:
These kits are accurate representations of the featured military vehicle. The kits do not include glue or paints, but are made for quick and fun construction.

MSRP:
Now: $16.84
Was:
And, they offer great quality at a very good value. The M46 was an American medium tank designed to replace the M26 Pershing and M4 Sherman. It was one of the U.S Army's principal medium tanks of the...

MSRP: $79.95
Now: $66.47
Was:
The Roberts class of monitors of the Royal Navy consisted of two heavily-gunned vessels built during the Second World War. They were the Roberts, completed in 1941, and Abercrombie, completed in 1943...