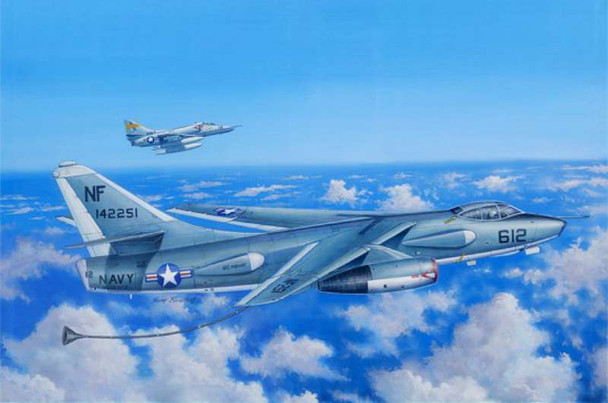 A-3 Skywarrior Model Airplane by Trumpeter. The Douglas A-3 "Skywarrior"was a strategic nuclear bomber developed for the US Navy. The aircraft had a largely conventional semi-monocoque fuselage, with two J57 turbojet engines in underwing nacelles, A-3's wings can be folded for storage below deck, radar-controlled tail turret and a crew of three. The A-3 Skywarrior project started in 1947, the prototype XA3D-1 first flew on 28 October 1952 and entered service with the Navy Heavy Attack Squadron One in 1956. Production ended in 1961. Douglas built a total of 282 Skywarriors. « less
View AllClose

MSRP: $79.95
Now: $67.19
Was:
A-3 Skywarrior Model Airplane by Trumpeter. The Douglas A-3 Skywarrior was designed as a strategic bomber for the United States Navy and was among the longest serving carrier-based aircraft in...

MSRP: $79.95
Now: $69.20
Was:
100% New Tool This long-awaited kit is finally coming! The Douglas A-3 Skywarrior was originally designed as a strategic bomber for the United States Navy and was among the longest serving...

MSRP: $79.95
Now: $69.22
Was:
A-3 Skywarrior, A-3 Skywarrior Model Airplane by Trumpeter. The Douglas A-3 Skywarrior was designed as a strategic bomber for the United States Navy and was among the longest serving carrier-based...

MSRP:
Now: $55.11
Was:
This kit by Dumas with its 100 plus laser cut parts will have beginners astonished by the ease of construction, while experienced modelers will appreciate the quality materials and precision laser...

MSRP:
Now: $14.76
Was:
Prima silicone molds for beautifully dimensional goodies to embellish your decor and craft projects. And they play well with so many types of media- air dry clay, polymer clay, earthen clay, hot...

MSRP:
Now: $11.76
Was:
These kits have easy to follow color patterns and allows you to make one fun project! This 5.75x9 inch package contains 3500 beads, tweezers, ironing paper and full-size pattern with instructions...