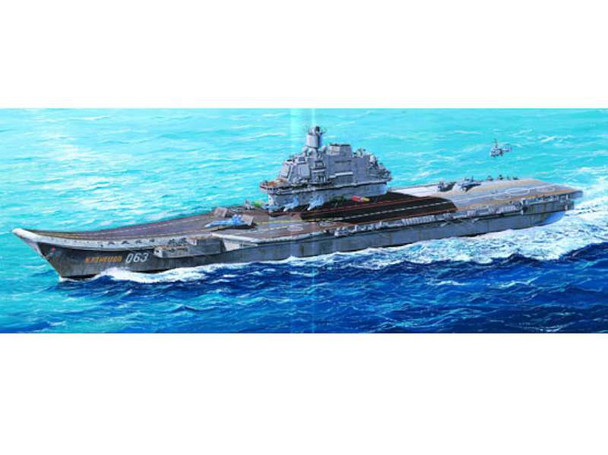 Contains 755 parts plus metal hull frame and screws. The Kuznetsov Class heavy aircraft carrying cruiser, also known as Project 1143.5 or Orel Class, was constructed at Nikolayev South Shipyard on the Black Sea in the Ukraine. The Kuznetsov aircraft carriers displaced roughly 65,000 tons and for the first time carried conventional take-off and landing aircraft. These included navalized versions of fourth-generation fighters, such as the Su-27K (later 'Su-33') and the MiG-29K, along with a converted Su-25 and several planned new designs. The bow of the Kuznetsov sloped upward in a twelve-degree "ski jump", which would permit short-take-offs from her relatively small deck. Admiral Kuznetsov was equipped with the Sky Watch 3D radar. Admiral Kuznetsov was launched in 1985; the intervening political turmoil delayed her formal commissioning until 1991, and she did not become fully operational until 1995. A second-of-class vessel, the Varyag, was launched in 1988 but was never commissioned. Admiral Kuznetsov is the only aircraft carrier in the Russian Navy. « less
View AllClose

MSRP: $324.95
Now: $239.22
Was:
Built in Camden, NJ, she was launched in 1960 in by flooding her drydock. A conventional slide down ways was ruled out because of her mass and the risk of impact with the Philadelphia shore on the...

MSRP: $129.95
Now: $106.47
Was:
She was hit more than once by enemy fire, each time returning to base for repairs and resuming battle action thereafter. The Saratoga received 7 battle stars for service in WWII. After the war, she...

MSRP: $241.00
Now: $175.56
Was:
Webster defines the word Enterprise as meaning"Undertaking, Project, A business organization, Initiative, etc.", and the CVN-65 fits all of these definitions perfectly. Highly detailed exterior...

MSRP:
Now: $6.39
Was:
The Grace Company-True Grips Non Slip Adhesive Rings. Apply these little rings to the back of any ruler to increase safety and cutting accuracy by preventing slipping. True Grips Adhesive Rings are...

MSRP:
Now: $16.17
Was:
GRACE COMPANY-TrueCut: Ruler with Ruler Track. The innovative Ruler Track and Cutter Guide system incorporated into the StraightCut rulers and rotary cutters makes all of your cuts straight and...

MSRP: $74.95
Now: $64.74
Was:
The Junkers Ju 87 or Stuka was a two-man (pilot and rear gunner) German dive bomber and ground-attack aircraft. Designed by Hermann Pohlmann, the Stuka first flew in 1935 and made its combat debut in...

MSRP: $129.95
Now: $106.47
Was:
She was hit more than once by enemy fire, each time returning to base for repairs and resuming battle action thereafter. The Saratoga received 7 battle stars for service in WWII. After the war, she...