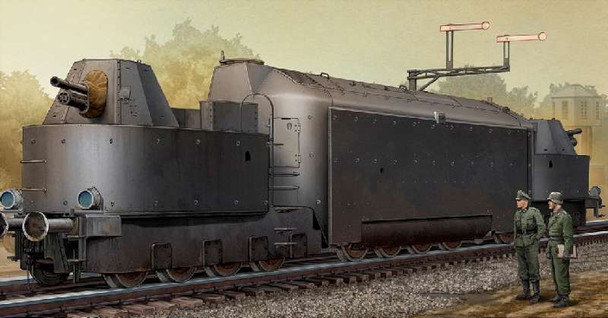 This German heavy armored railcar was a modification of German locomotive WR 550. It was encased in heavy armor and equipped with two 20mm artillery positions, one at each end of the unit. After capture by the Soviets, the towers were replaced by Russian artillery cannons armed with 76.2mm FK 295/1. This vehicle was the heaviest armored railcar ever produced. Only one piece was built and it was used to protect Germanys Eastern Front near the end of the war. Kit consists of over 480 parts including photo-etched dertails and 8 section of track. Highly detailed plastic pieces. Assembly, paint, glue and sprue cutters required (not included) Illustrated instructions « less
View AllClose

MSRP: $47.95
Now: $42.27
Was:
The E 25 was the second largest Panzer in the Entwicklungsfahrzeug series created by Oberbaurat Kniepkamp of Wa Pruef 6 . The detailed design contract was awarded to Argus Werke in Karlsruhe, with...

MSRP:
Now: $34.03
Was:
Trumpeter is an internationally recognized injection molded plastic model kit manufacturer that produces unique subjects of excellent detail and quality! The LAV-25 has a two-person, power-operated...

MSRP: $54.95
Now: $50.94
Was:
Transport Model Vehicle by Trumpeter. Contains 220 parts. The Heavy Cargo Cars (Schwereer Feldbahnwagen) were often seen with troops in transport. The cargo transported can be what ever you mighe...

MSRP: $109.95
Now: $90.65
Was:
Artilleriewagen, Armored Train Model Vehicle by Trumpeter. For the armored train units of Type BP42, the artillery was increased, following Russian and Polish examples, to four guns, which were not,...

MSRP: $109.95
Now: $86.67
Was:
The German Kommandowagen was one of the safest troop transport methods since it was equipped with thick steel armored protection plates and a gun. Each Kommandowagen could hold dozens of troops, and...

MSRP: $54.95
Now: $49.98
Was:
Transport, Transport, Railway car Model Vehicle by Trumpeter. The Deutche Reichsbahn was pushed into service when the German Army began to move mass amounts of troops and machinery. - The Light...

MSRP: $47.95
Now: $42.27
Was:
The E 25 was the second largest Panzer in the Entwicklungsfahrzeug series created by Oberbaurat Kniepkamp of Wa Pruef 6 . The detailed design contract was awarded to Argus Werke in Karlsruhe, with...

MSRP:
Now: $8.71
Was:
STAMPERS ANONYMOUS-Tim Holtz Collection Cling Rubber Stamps. These red rubber stamps come mounted on cling foam so you can use them with any acrylic block (sold separately). Great for using with...