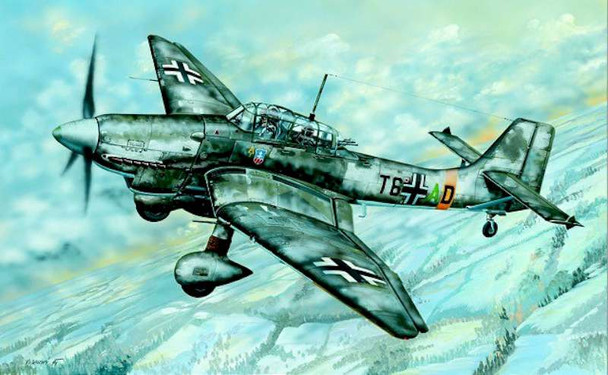 The Junkers Ju 87 or Stuka was a two-man (pilot and rear gunner) German dive bomber and ground-attack aircraft. Designed by Hermann Pohlmann, the Stuka first flew in 1935 and made its combat debut in 1936 as part of the Luftwaffe's Condor Legion during the Spanish Civil War and World War II. Decals and 4-view color painting guide for (2) aircraft - includes instrument panel. « less
View AllClose

Junkers Ju 87R Stuka Seatbelts (designed to Be Used with

MSRP: $129.95
Now: $106.01
Was:
She was hit more than once by enemy fire, each time returning to base for repairs and resuming battle action thereafter. The Saratoga received 7 battle stars for service in WWII. After the war, she...

MSRP:
Now: $83.27
Was:
Early in World War 2, the world was stunned by the effective dive bombing tactics of the JU 87 Stuka. First tested in the Spanish Civil War, it went through considerable design changes before...