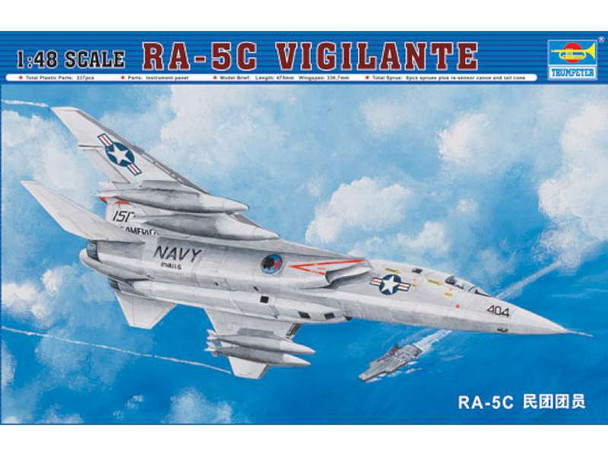 Trumpeter is an internationally recognized injection molded plastic model kit manufacturer that produces unique subjects of excellent detail and quality. - The RA-5C was developed in parallel with the A-5B, and first flew on 30 June 1962. The new BLC scheme proved a little tricky, as it required more engine power. As the RA-5C was substantially heavier than the A-5A, this meant that once the BLC system was engaged the aircraft lost power and tended to drop abruptly. The major difference from the A-5B was the RA-5C"s equipment. The RA-5C entered fleet service in 1964. 43 RA-5Cs were built, following the 12 A-5Bs that had been completed as RA-5Cs. After this batch of 43 was completed, the 43 surviving A-5As and A-5Bs were rebuilt to RA-5C standard, and the production line was shut down. The RA-5C proved so useful in Vietnam that the Navy ordered 46 more RA-5Cs in 1968. Only 36 were actually completed, however, with the last rolling off the production line in August 1970. This final batch featured J-79-GE-10 engines with 79.46 k - By this time, the RA-5C had plenty of power and it was no longer such a handful on carrier deck landings - Markings included for RA-5C, Bu - No.151726, of RVAH-5 USS America (CVN-66). This finely detailed plastic model kit requires assembly and painting. « less
View AllClose

MSRP: $34.95
Now: $32.36
Was:
Exhibition Team, T-38 Talon Model Airplane by Trumpeter. The Northrop T-38 Talon is an American supersonic jet trainer. It was the world's first supersonic trainer and to date, is also the most...

MSRP: $37.95
Now: $32.46
Was:
The seven heavy cruisers in the class were outwardly similar. Their wartime displacement was 10,136 tons standard and 12,436 tons at full load. This displacement increased year by year due to the...

MSRP:
Now: $61.63
Was:
When an AC wall outlet isn&rsquot available and the battery in your device is depleted, a portable power inverter is a great option. Convert 12V DC from a vehicle battery to AC power. Portable power...

MSRP:
Now: $11.65
Was:
Wilton-Treat Stand. Proudly display your special treats! In minutes you can create a bright and colorful 3-tier cupcake stand with a dun decorative topper. This package contains one 16x11-3/4 inch 3-...

MSRP:
Now: $7.11
Was:
Needle Creations Felt Friends kits are a collection of fun ornaments designed to keep the festive spirit alive all year long! Great as a gift topper, fashion accessory or a quick and easy DIY project...