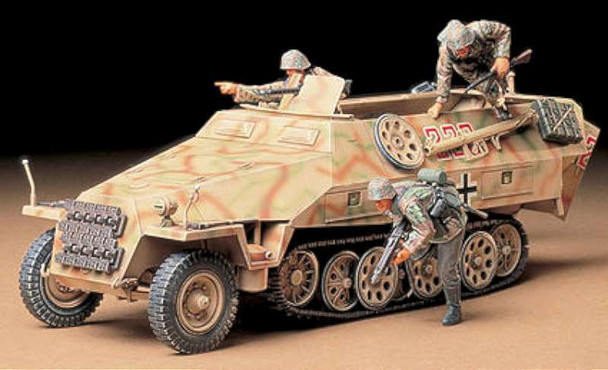 Of the many variables that take place during any conflict, supply and mobility are the most pressing. Germany realized this fact very early in World War 2 and demonstrated use of support vehicles during their early Blitzkriegs. They had developed a great number of vehicles for differing purposes, and a very successful on was the Sd.Kfz. 251 half-track. This semi-tracked vehicle became the centerpiece of their mechanized corps throughout the conflict. Early models used a very complicated hull construction, made up of obliquely placed armor plating. This was somewhat simplified in the C and D types, to make mass production easier. The final D version appeared in 1943, and it became the most widely used model of the four versions. Of the many types produced, the basic personnel carrier was the Dd.Kfz. Powered by the Maybach HL42 six cylinder engine, it had a top speed of 53km/h and a range of 300km. It was armed with two MG42 machine guns plus automatic rifles for the crew, and could carry twelve fully equipped soldiers. This versatile half track was also the basis for a wide variety of self-propelled weapon systems, which were mounted to its chassis. More than 10,000 of the D type half-track and its variants were produced. « less
View AllClose

MSRP: $87.00
Now: $68.81
Was:
This is the 1/35 Scale German Nashorn Heavy Tank Destroyer Plastic Model Kit from the Military Miniature Series by Tamiya. Suitable for Ages 14 & Older.

MSRP:
Now: $17.15
Was:
Tamiya 35343 German Artillery Crew Set - Africa Corps Luftwaffe Increase your diorama options even further with this handy figure and accessory set. It contains parts which were previously only...

MSRP:
Now: $32.95
Was:
Mildliner Brush is conveniently double-ended with a paint brush-like tip and fine marker in one pen. Mild water based pigment ink is translucent, excellent for layering and doesn't bleed through. The...

MSRP:
Now: $6.66
Was:
WOW EMBOSSING POWDER: WOW! Embossing Powder. Embossing powder is the perfect way to add new life to your embossing projects. Add it to wet ink, dry it, and watch it create a whole new dimension! This...