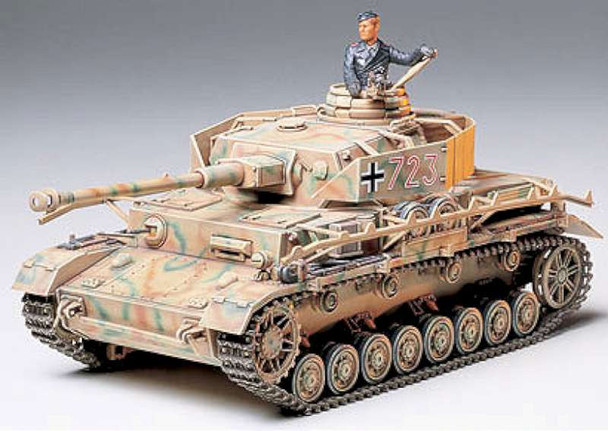 The Panzerkampfwagen IV was Germany's most important tank during the second world war. This represented more than one-third of Germany's total wartime tank production. It was the backbone of the Panzer Divisions and it was often referred to as their Workhorse The Pz. - IV underwent constant improvement throughout its long career. As an example, its original short-barreled 7.5cm main gun was replaced with the long barreled 7.5cm Kw - K40 L/43 gun beginning with the Ausf. - F2 version. The further improved 7.5cm Kw - K40 L/48 was added to the Ausf. - H onwards. In 1944 however, with the introduction of the new Panther and Tiger tanks, plus other tactical considerations, the Pz. - IV began to serve mainly in a defensive capacity. A need was required to simplify construction and increase productivity, plus conserve scarce raw materials. The last of the series, the Ausf. - J thus had a much simpler construction, and an extra fuel tank replaced the auxiliary engine/generator. This greatly increased its range from 210km to 320km and was welcomed by the German troops, as they were having difficult with their supply, but it was attained at the expense of electric power for the turret traversing motor. The thin steel plates known as Schurzen skirts, first introduced with the Ausf. - G, were sometimes replaced with heavy gauge wire mesh, or not even used at all. « less
View AllClose

MSRP:
Now: $14.35
Was:
Suitable for Ages 10 & Older. FEATURES: Sticker sheet enables easy reproduction of Zimmerit on the 1/35 scale Panzer IV Ausf. J Simply applying the stickers on the model and painting, a realistic...

MSRP: $33.00
Now: $31.58
Was:
The Panzer IV was one of the most feared weapons in WWII, and would serve German forces throughout the conflict in the guise of a number of variants. The Ausf. H variant itself featured early, middle...

MSRP: $339.95
Now: $260.79
Was:
The Panzerkampfwagen IV (Pz.Kpfw. IV) commonly known as the Panzer IV was a German medium tank developed in the late 1930s and used extensively during the Second World War. Decals and 5-view painting...

MSRP:
Now: $49.94
Was:
This is a tube White Plastic Model Putty from Tamiya. FEATURES: For repairing and modifying plastic models and repairing and coveringthe surfaces of metal and wooden models Can be diluted with Tamiya...

MSRP:
Now: $10.48
Was:
Simulating Zimmerit on military models using putty enhances the models presence but at the same time it requires advanced skills, and is time consuming. This sticker sheet enables easy reproduction...

MSRP: $33.00
Now: $31.58
Was:
The Panzer IV was one of the most feared weapons in WWII, and would serve German forces throughout the conflict in the guise of a number of variants. The Ausf. H variant itself featured early, middle...

MSRP: $108.00
Now: $86.96
Was:
High quality plastic model kit of the German WWII battleship Bismark. The kit has a one piece moulded plastic hull and a stand.