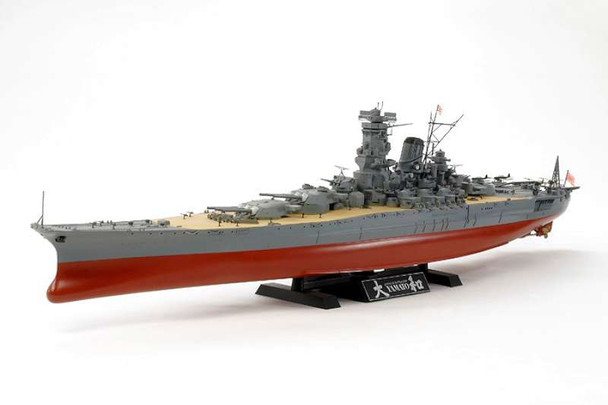 With many revolutionary features incorporated into her design, the Yamato was completed in December 1941, and met her final fate at the hands of American Navy carrier aircraft in the South China Sea while on a one way mission to Okinawa. This model features minor modifications to Tamiya's previous Yamato replicas Items 78002 and 78014, and has her looking as she did just prior to departing for her final mission, in an exquisite 1/350 scale assembly kit display model. The Yamato's massive imposing silhouette is accurately reproduced, and both the main gun turrets and secondary armament turrets can be rotated even after assembly. « less
View AllClose

MSRP: $43.00
Now: $35.62
Was:
In August 1940, Japanese battleship YAMATO was finally launched at water from Kure naval yard's dry dock. Work on the YAMATO project began with the development and modernization such as the huge...

MSRP: $75.00
Now: $60.46
Was:
The Kagero was completed in just over 2 years, with it being laid down in September 1937 and commissioned in November 1939. The Kagero was instrumental in the Japanese reaching Pearl Harbor, and saw...

MSRP: $146.00
Now: $112.49
Was:
Completed in 1942, the Musashi took part in various campaigns before finally meeting her fate at the hands of U.S. Navy aircraft in the Battle of Leyte Gulf. Tamiya's precision-made assembly kit...

MSRP: $146.00
Now: $112.49
Was:
Completed in 1942, the Musashi took part in various campaigns before finally meeting her fate at the hands of U.S. Navy aircraft in the Battle of Leyte Gulf. Tamiya's precision-made assembly kit...

MSRP:
Now: $7.66
Was:
PERLER-Bead Pen. Perfect for fun and fast beading! For use with all classic pegboards (sold separately). This package contains one 5x2 inch bead pen. Recommended for ages six and up. Imported.

MSRP:
Now: $16.34
Was:
DMC-Pearl Cotton Skeins. Make a masterpiece and an heirloom with this pearl cotton, it is a highly mercerized, twisted and non-divisible lustrous cotton thread. This package contains one 27.3yd...

MSRP:
Now: $10.14
Was:
The ideal addition to any paper crafting project! This pad contains 30 6x6 inch double-sided sheets in six different designs (five of each). Acid and lignin free. Imported.

MSRP:
Now: $8.54
Was:
A great value for afghans and charity projects. Machine washable and dryable for easy gift giving. Works up perfectly with our Sweet Roll yarn for more project possibilities. -100% Acrylic -7oz...

MSRP:
Now: $7.27
Was:
EK SUCCESS-Jolee's Mini Repeats: Dimensional Stickers. Mixed media dimensional stickers in a variety of themes and designs perfect for any and every occasion. This package contains Gold Stars: twenty...

MSRP: $16.99
Now: $14.26
Was:
These quilting pins are heat resistant with a comfort grip. This package contains 100 1.75 inch quilting pins within a designer storage case. Imported.

MSRP: $18.00
Now: $14.40
Was:
Prima silicone molds for beautifully dimensional goodies to embellish your decor and craft projects. And they play well with so many types of media- air dry clay, polymer clay, earthen clay, hot...