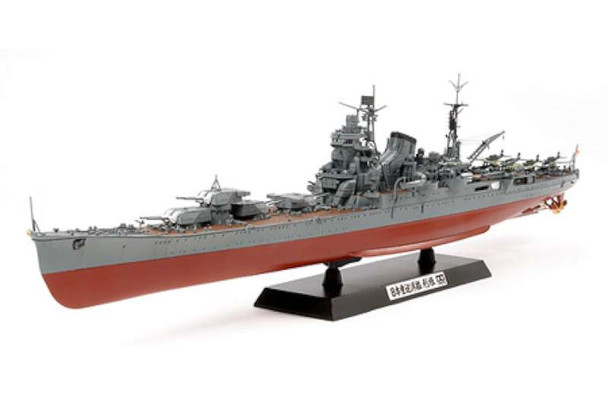 She was 189.1m in length, and was powered by 4 turbines which allowed her to reach a top speed of 35kn. During WWII, the Tone was present at many of the major Pacific Theater engagements. In July, 1945 the Tone, along with most of the surviving large Japanese Navy warships, was based at the Kure Naval Arsenal. On July 24th, Task Force 38 launched a large scale air raid on Kure and Tone was hit by three bombs which sank her. Specs & Features 1/350 scale plastic assembly model kit of the Japanese Heavy Cruiser Tone. You can choose to build either a waterline or a full-hull display model. Kit includes reinforcing frame parts and screws to enable accurate assembly for both waterline and full-hull models. Display stands for the highly detailed aircraft models are included to allow you to create a flying diorama. The bridge windows and searchlight lenses are depicted with transparent parts. The masts and radio posts are made with reinforced ABS resin.-Features metal-plated screw shafts and metal parts for anchor and chain. Machine gun parts feature a laser processing for a sharper, more realistic finish. Parts are included to depict main gun barrels at different elevation levels. Polycaps enable switching of gun turrets as well as free turret rotation for a variety of displays. Compliment of floatplanes included Add greater realism to your model with Item 12622 1/350 Crew Set (144pcs.). « less
View AllClose

MSRP: $46.00
Now: $39.66
Was:
Fast and well-armed with seven 140mm guns and eight torpedo tubes, the cruiser first saw action in Chinese waters, protecting transports near Shanghai. It then acted as flagship for the destroyers...

MSRP:
Now: $15.15
Was:
Thinlits create dazzling detailed shapes for more creative cardmaking and papercrafting projects. The wafer-thin chemically-etched dies are designed to cut, emboss or stencil a single sheet of...