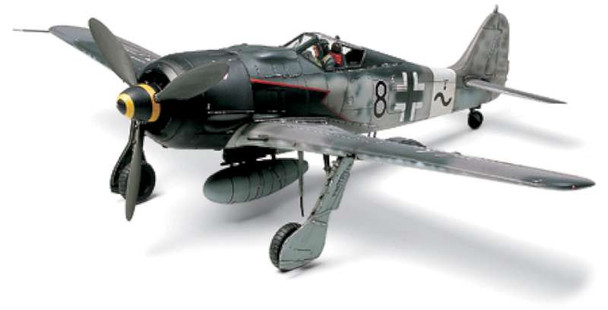 The Fw 190 A-8 entered production in February 1944, powered either by the standard BMW 801 D-2 or the 801Q also known as 801TU. The 801Q/TU was a standard 801D with improved, thicker armour on the front annular cowling, which also incorporated the oil tank, upgraded from 6 mm .24 in on earlier models to 10 mm .39 in. - W for a short time. The Erhöhte Notleistung system operated by spraying additional fuel into the fuel/air mix, cooling it and allowing higher boost pressures to be run, but at the cost of much higher fuel consumption. From the A-8 on, Fw 190s could be fitted with a new paddle-bladed wooden propeller, easily identified by its wide blades with curved tips. The new canopy included a larger piece of head armour which was supported by reinforced bracing and a large fairing. A new internal fuel tank with a capacity of 115 L 30 US gal was fitted behind the cockpit, which meant that the radio equipment had to be moved forward to just behind the pilot. Externally, a large round hatch was incorporated into the lower fuselage to enable the new tank to be installed, and the pilots oxygen bottles were moved aft and positioned around this hatch. A fuel filler was added to the port side, below the rear canopy and a rectangular radio access hatch was added to starboard. This fuselage would form the basis for all later variants of the Fw 190 and the Ta 152 series. The Morane whip aerial for the Y-Verfahren was fitted as standard under the port wing, just aft of the wheelwell. The A-8/R2 replaced the outer wing 20 mm cannon with a 30 mm 1.18 in MK 108 cannon. The A-8/R8 was similar, but fitted with heavy armour including 30 mm 1.18 in canopy and windscreen armour and 5 mmin cockpit armour. The A-8 was the most numerous of the Fw 190 As, with over 6,550 A-8 airframes produced from March 1944 to May 1945. A-8s were produced by at least eight factories during its lifetime. - Features Ready to assemble precision model kit Modeling skills helpful if under 10 years of age Kit contains parts for one model Cement and - Paint not included - Specifications1/48 Scale Aircraft Series - Wingspan: 219mm « less
View AllClose

Focke Wulf FW 190A-8 Landing Flaps (designed to Be Assem

Focke Wulf FW 190A Landing Flaps (designed to Be Assembl

MSRP:
Now: $19.81
Was:
This paint works great on many surfaces! Projects take on multiple colors at once depending on the light or angle. Create a color change with as few as two coats. Apply additional layers for a...

MSRP:
Now: $11.42
Was:
TESTORS-Spray Enamel Paint. These all-purpose enamel paints can be used on many kinds of surfaces. Finely ground pigments give superb flow and coverage. They are lead free; fast-drying; and easy to...

MSRP:
Now: $83.27
Was:
Early in World War 2, the world was stunned by the effective dive bombing tactics of the JU 87 Stuka. First tested in the Spanish Civil War, it went through considerable design changes before...

MSRP: $40.00
Now: $37.34
Was:
Taiho was Japan's first carrier to feature an armored flight deck; consisting of 3in plate and intended to stop a 1,000lb bomb, this was also the longest to see Japanese service. The top weight of...

MSRP: $46.00
Now: $39.66
Was:
Fast and well-armed with seven 140mm guns and eight torpedo tubes, the cruiser first saw action in Chinese waters, protecting transports near Shanghai. It then acted as flagship for the destroyers...