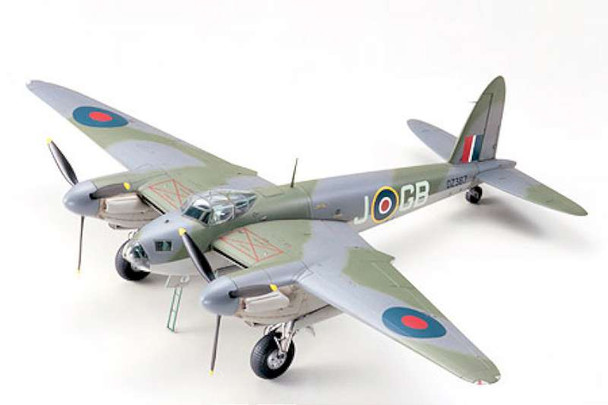 About the De Havilland Mosquito B Mk.IV/PR Mk.IV In 1939, the De Havilland company envisioned the plane to be an unarmed high-speed bomber, and had experience with the Comet, which was a wooden racing plane. Except for the engine and landing gear, the Mosquito was comprised of wood, offering strategic advantages. The Air Ministry was reluctant to adopt the wooden aircraft, but placed orders for 50 planes in March 1940 for reconnaissance use. In November 1940, the Mosquito reached speeds of 630km/h during test flights, demonstrating its potential and quickly promoting additional orders of 150 planes. The Mosquito PR Mk.I reconnaissance plane was first deployed in July 1941; the B Mk.IV bomber started deployment in the Spring of 1942. On May 31, 1942, the Mosquitoes led a daylight raid on Caim. In September 1942, the Gestapo headquarters in Oslo was bombed. German officials delivering a daytime speech in Berlin were attacked on January 30, 1943. These events demonstrated the Mosquito's ability to carry heavy loads and deliver low altitude surprise attacks with accuracy. The camera equipped PR Mk. IV reconnaissance plane discovered the German Battleship Tirpitz in the Artic Circle and scouted V2 rocket facilities. The Mosquitoes performed their duties with minimal losses, displaying their remarkable abilities. « less
View AllClose

De Havilland Vampire F.6 (designed to Be Assembled with

MSRP: $33.00
Now: $30.92
Was:
About the North American F-51D Mustang Korean WarThe U.S. Army Air Corps gave it the title of P for Pursuit 51, and it was named Mustang by the British. Of the several variations of the Mustang, the...

MSRP:
Now: $14.76
Was:
Prima silicone molds for beautifully dimensional goodies to embellish your decor and craft projects. And they play well with so many types of media- air dry clay, polymer clay, earthen clay, hot...