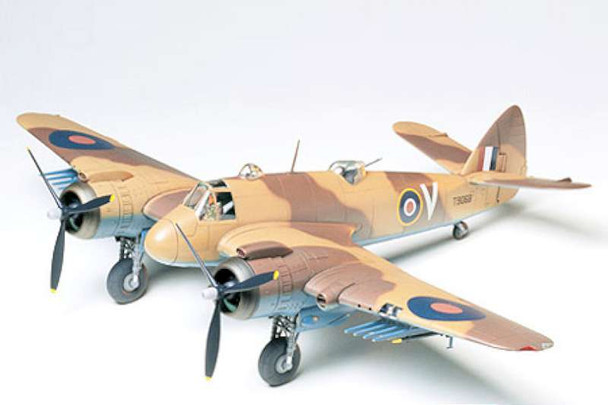 Bristols Beaufighter was one of the most successful and widely used twin engines fighter types during WW2. The first series production Beaufighter MK.1 entered service in September 1940. With its four nose-mounted 20mm cannons and six 7.7mm machine guns in the wings, this stub-nosed fighter became the most heavily armed aircraft in service with the RAF during the war. As the German Luftwaffe eventually turned to night bombing in autumn of 1940, priority was put on night fighters and the first operational Beaufighters were fitted with the Airborne Interception AI radar, which designated the Mk.1F F was suffix for Fighter Command. Meanwhile, its rugged construction was thought ideal for long range fighting and escort duties, and the Mk.1C under the Coastal Command became ready for initial operations in late March 1941. Introduction of the more powerful, 1,670hp Hercules VI engines by late 1941 resulted in the Mk.VI. More than 5,900 Beaufighters of various types were produced.COMING SOON « less
View AllClose

MSRP: $18.50
Now: $17.47
Was:
About the Schwimmwagen Designed by Dr. Ferdinand Porsche, the amphibious Schwimmwagen was used by the German land forces, paratroopers and engineering corps during WWII, fulfilling both...

MSRP:
Now: $18.98
Was:
The Fieseler Fi 103, better known as the V-1 German: Vergeltungswaffe 1, retaliation weapon 1 and Buzz Bomb, also colloquially known in Britain as the Doodlebug, was an early pulse-jet-powered...

MSRP: $41.00
Now: $35.14
Was:
Soon after the advent of aircraft and submarines during World War I, the combined operation of those two weapons were considered by many countries. However, it was only the Imperial Japanese Navy...

MSRP:
Now: $19.90
Was:
This paint works great on many surfaces! Projects take on multiple colors at once depending on the light or angle. Create a color change with as few as two coats. Apply additional layers for a...

MSRP:
Now: $11.56
Was:
TESTORS-Spray Enamel Paint. These all-purpose enamel paints can be used on many kinds of surfaces. Finely ground pigments give superb flow and coverage. They are lead free; fast-drying; and easy to...

MSRP:
Now: $5.26
Was:
SUSAN BATES-Split Lock Stitch Markers. These split lock stitch markers from Susan Bates can be used on your needle or to temporarily mark a spot in knitted or crocheted fabric. This package...