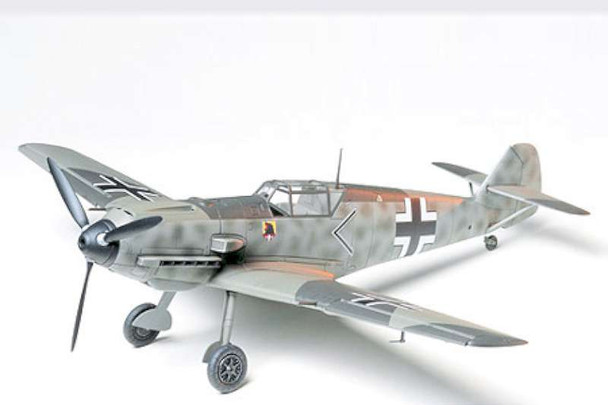 About the Messerschmitt Bf109 E-3 It was the worlds most advanced fighter at the time of its debut in 1936, and remained as the standard fighter for the Luftwaffe throughout the conflict. Created by the brilliant designer Willi Messerschmitt, it had the smallest possible airframe built around the most powerful engine available. It also boasted many of the then innovative features such as an all metal stressed skin construction, retractable main landing gear, automatic Handley-Page leading edge slats, etc. The Bf109 saw first combat during the Spanish Civil War and fully demonstrated its exceptional maneuverability, inherited from its precedent Bf108 Taifun Typhoon multi-purpose sports plane. The Bf109 underwent numerous improvement throughout its career, and mass production of the E variant started late in 1939. Within one year, about 2,000 E aircraft were rolled out. Its excellent performance greatly contributed in the active service of German pilots at the Western Front and during the Battle of Britain. The E-3 version used an improved Daimler-Benz DB601Aa engine capable of 1,100 h.p. output. This engine had provision for mounting a 20mm MG FF cannon on the crankcase and firing through the propeller hub. The Messerschmitt Bf109E was one of the best fighters of the early WW2 period, on a par with the British Spitfire. « less
View AllClose

MSRP: $47.95
Now: $42.58
Was:
The Messerschmitt Bf 109 was a German World War II fighter aircraft designed by Willy Messerschmitt in the early 1930s. It was one of the first true modern fighters of the era, including such...

Messerschmitt BF 109E Wheels (designed to Be Used with E

Messerschmitt BF 109E-3 (self adhesive) (designed to Be