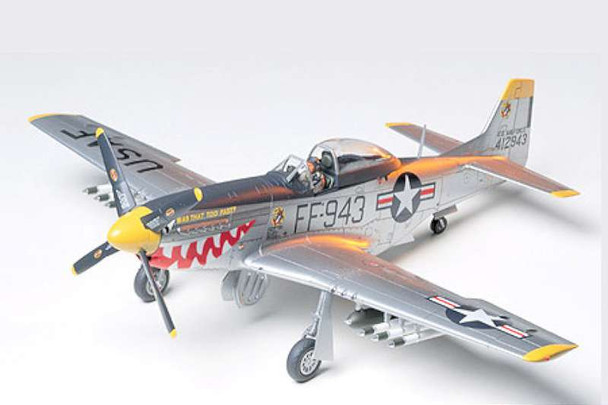 About the North American F-51D Mustang Korean WarThe U.S. Army Air Corps gave it the title of P for Pursuit 51, and it was named Mustang by the British. Of the several variations of the Mustang, the P51-D is considered the definitive version and was the first to have the bubble canopy. More D models were built than any other variant, with a total of 9,603 being produced. At the conclusion of WW2, Mustangs were in operation all over the world, flying in several nations air forces. When the Korean conflict broke out, hundreds of F for fighter 51s were in Japan awaiting scraping. Because they possessed the slow speed maneuverability that was absent in the new jets then entering service, the F-51 was ideal to work with Forward Air Controllers FACs on the ground in Korea. The major drawback to this was the F-51s liquid cooled engine susceptibility to anti-aircraft and small arms fire when attacking ground targets. This cause the Mustang to have the highest loss ratio of any aircraft in Korea. A total of 194 were lost in three years, with only 10 being downed in combat with other aircraft. « less
View AllClose

North-American P-51D Mustang Exterior (designed to Be As

MSRP: $290.20
Now: $215.35
Was:
The P-51D Mustang incorporated advanced features such as a laminar flow wing and an efficient radiator design. It was powered by the Packard-built Rolls-Royce Merlin V-1650 engine and it demonstrated...

MSRP: $58.57
Now: $51.13
Was:
About the De Havilland Mosquito B Mk.IV/PR Mk.IV In 1939, the De Havilland company envisioned the plane to be an unarmed high-speed bomber, and had experience with the Comet, which was a wooden...

MSRP: $57.24
Now: $54.09
Was:
About the McDonnell Douglas F-15C EagleEver since its maiden flight in July 1972, this record breaking flying machine has been a yardstick for jet fighter design. Powered by two Pratt and Whitney...

MSRP:
Now: $40.50
Was:
Rotating two-tier paint jar stand lets you organize your paints clearly for easy access. It can store up to 7 jars of acrylic mini or 9 jars of enamel paints per tray. Each tray has a small groove...

MSRP:
Now: $12.19
Was:
This is a Package of Two Paint Stirrers from Tamiya. FEATURES: Stainless steel tool is designed for stirring bottled paints and for blending different color shades. One end is shaped like a small...

MSRP: $74.55
Now: $63.38
Was:
This is a model of the German Bundeswehr Self-Propelled Howitzer M109A3G. It is a collaborative release by Italeri and Tamiya. The M109A3G-specific parts are made by Tamiya and Italeri. The kit has...

MSRP: $24.63
Now: $22.76
Was:
During WWII the British Army needed to provide mobility for paratroopers who had been dropped behind enemy lines; their solution was the folding airborne bicycle (according to some known as the...