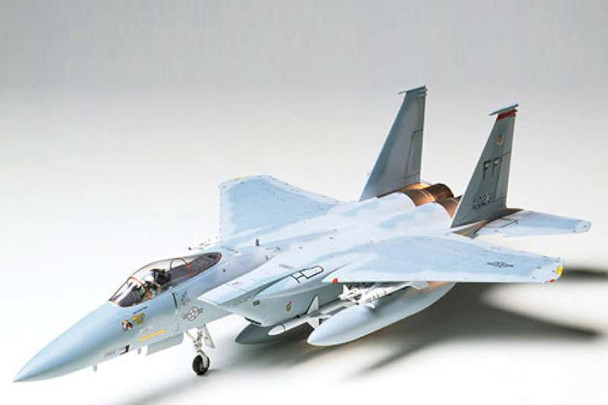 About the McDonnell Douglas F-15C EagleEver since its maiden flight in July 1972, this record breaking flying machine has been a yardstick for jet fighter design. Powered by two Pratt and Whitney F100-PW-100 turbofan engines, it is capable of speeds in the Mach 2.5 range. The F-15 Eagle can carry a heavy and devastating complement of weaponry such as its internal 20mm M-61A-1 rotary cannon, plus four AIM-9L Sidewinder missiles, and four AIM-7F Sparrow anti-aircraft missiles. The early production F-15 was designated the F-15A, while the two-seat version was called the B model. In 1979, an improved and upgraded F-15 was introduced. One notable change was a 15% increase in internal fuel capacity, while even more fuel was made possible by utilizing conformal tanks that snuggle beneath the wing ad against the jet inlet ramps. In order to accept this extra fuel weight, the landing gear had to be reinforced. These modified F-15s are called the C-type for the single-seater and F-15D for the two seat version. The F-15C owes its superb performance to many technological and electronic wonders, and shall certainly continue to play its role as an air superiority fighter for many years to come. « less
View AllClose

MSRP:
Now: $8.23
Was:
Can be used to mask off areas in both plastic models and R/C car polycarbonate body applications. Comes with dispenser for quick use. 59ft (18m) long

MSRP: $33.00
Now: $30.42
Was:
About the North American F-51D Mustang Korean WarThe U.S. Army Air Corps gave it the title of P for Pursuit 51, and it was named Mustang by the British. Of the several variations of the Mustang, the...

MSRP:
Now: $9.56
Was:
This is an 18 Meter Roll of 18mm Tamiya Masking Tape. - Features:This is a thin, self-adhesive paper tape, developed for model applicationsFlexibleEasily applied to curved surfaces making it ideal...