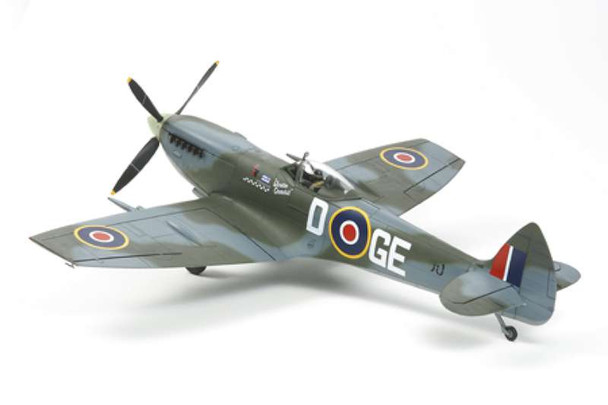 The Supermarine Spitfire was designed by R.J. Mitchell and its distinctive silhouette makes it one of the most widely-recognized fighters of WWII. Famous for its exploits during the Battle of Britain, the Spitfire continued to evolve to counter newer Axis aircraft. As a result of this evolution, numerous variants of the Spitfire were born and served with distinction in the RAF as well as the air forces of many other countries until well after the end of WWII. - XVI was almost identical to the Mk. - IX in nearly all aspects except that most were powered by a Packard-built Merlin 266 engine which had taller dimensions than the Rolls Royce 66 engine and featured a bubble canopy with a "low back" fuselage. Other new structural changes saw the Mk. - XVI equipped with a larger 96 gallon main fuel tank, as well as two additional fuel tanks installed at the rear of the fuselage and a larger oil sump to allow it to fly longer distances. - XVIes were mainly used in ground-attack roles and came with the "E" armament configuration of two 20mm cannons and two 12.7mm Browning machine guns. Also, as concrete tarmacs became more common as the war progressed, changes to the camber angle of the Spitfire's landing gears were made to make for more efficient landings and take-offs. With the changes made to the new gun and cannon positioning, ammunition ejection ports, and the landing gear design, the wings featured new bulges compared to the Mk. - The Mk. - XVIe, served with distinction throughout Europe for the latter half of the war. Specs & Features 1/32 scale assembly kit of the Supermarine Spitfire M.XVIe. This is the first 1/32 scale Spitfire Mk. - XVIe full injection model. Challenging model production technology limits, the engine cowlings have an amazing 0.4mm thickness to allow for a fully accurate scale representation of the engine. These cowlings can be installed and removed thanks to small magnets. The E Wing with its two 20mm cannons and two 12.7mm Browning machine guns is faithfully reproduced. The details of the Packard Motor built Merlin 266 engine, including oil tanks and supercharger, have been faithfully reproduced. Movable elevators, rudder, and ailerons. Flaps can be depicted in up or down position. Landing gear parts included to depict either up or down position (interchangeable). Complicated frame configuration of the cockpit features realistic bulkheads and frames. Photo-etched parts to depict details such as wheel covers, cockpit area including instrument panel and seat belts with or without pilot included. 1 seated and 1 standing pilot figures are included. Three kinds of markings included. « less
View AllClose

MSRP:
Now: $14.11
Was:
The Spitfire gained immortality during the Battle of Britain in the summer of 1940. The main role was to intercept and destroy the Luftwaffe's fighters whilst the Hurricanes of the RAF attacked the...

Supermarine Spitfire Mk.VIII Seatbelts (designed to Be A

MSRP: $149.99
Now: $104.72
Was:
With the foil applicator, you are able to achieve amazing, professional, gorgeous foil effects like never before! Create little details or high- impact wall art. The sky's the limit! Has six...

MSRP:
Now: $69.03
Was:
The C-130 is by far the most widely used tactical cargo plane of the last forty years. Notwithstanding its age no real replacement has been built so far. Therefore the four-engine Lockheed Aircraft...

MSRP: $48.95
Now: $45.60
Was:
This is a Walnut scale, Rubber-Powered, Spad VIII 18 Airplane Model from Dumas. For Beginners Learning How to Build & Fly or the Advanced Modeler.