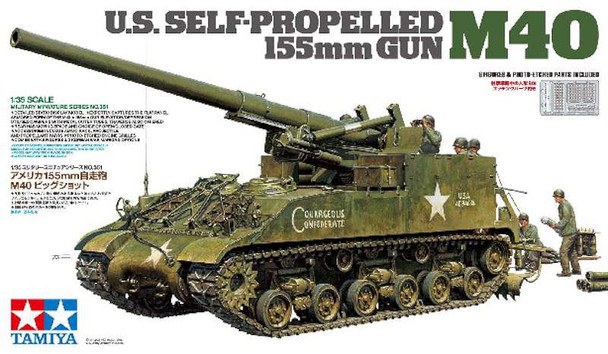 This is an assembly model of the U.S. It is a never before seen subject in the Tamiya line-up of 1/35 scale models. The kit uses all new tooling with the exception of the suspension parts as they are from the M4A3E8 Sherman "Easy Eight" model kit. The M40 was a significant step in U.S. Army artillery mechanization pairing the M1 155mm gun with the proven M4 Sherman chassis. Armor was light given its intended use as a long range weapon (they were effective up to 23.5km) away from the front line while the layout was changed from the M4 to allow a big fighting compartment at the rear to accommodate the big gun. It was fitted with smooth horizontal volute spring suspension (HVSS). Over 400 were produced before the end of WWII; although they never fought in the conflict one example of their T83 prototype did. The M40 served in the Korean War and was eventually replaced by the M53. « less
View AllClose

MSRP: $56.00
Now: $47.61
Was:
This is a model of the German Bundeswehr Self-Propelled Howitzer M109A3G. It is a collaborative release by Italeri and Tamiya. The M109A3G-specific parts are made by Tamiya and Italeri. The kit has...

MSRP:
Now: $10.85
Was:
WILTON-Fondant Rolling Pin. Use this handy, non-stick tool to roll out fondant for all kinds of cake and cookie decorating. This package contains one 9x1x1 inch Fondant Roller, two 1/8 inch guide...

MSRP:
Now: $10.68
Was:
WILTON-Recipe Right: Biscuit/Brownie Pan. Recipe Right pans are constructed of heavy-gauge steel that provides an even heating performance. The non-stick coating makes food release and clean-up a...

MSRP:
Now: $13.69
Was:
Perler-Beads. Be creative and design your Perler pegboards (not included) with these beads! Have an adult finish your project by fusing yours beads with an iron. This package 10x5x1 inch package...