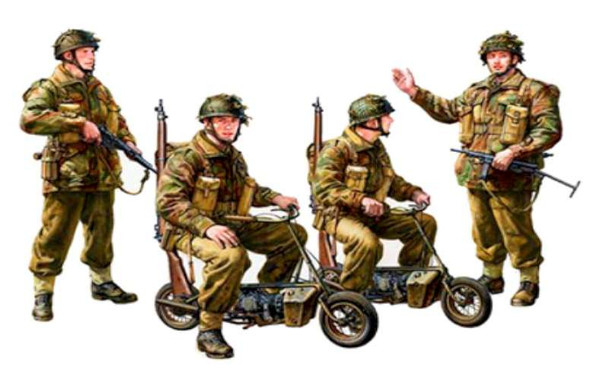 This kit includes 4 British paratrooper figures and 2 small folding motorcycle models in 1/35 scale. The motorcycle was originally developed for the British Special Operations Executive (SOE). Between 1942 and 1943 around 3 600 motorcycles were produced and were largely distributed to the 1st and 6th Airborne divisions. Thanks to their folding mechanism they could be packed snugly into small containers and air-dropped so that the paratroopers could use them upon landing. They were employed in the Normandy landings. Paint and glue are not included. « less
View AllClose

MSRP: $36.67
Now: $32.65
Was:
This is the 1/35 Scale WWI British Infantry with Small Arms and Equipment by Tamiya. Suitable for Ages 14 & Older. FEATURES: Highly detailed plastic pieces molded in tan 4 infantry figures in...

MSRP: $26.09
Now: $24.12
Was:
During WWII the British Army needed to provide mobility for paratroopers who had been dropped behind enemy lines; their solution was the folding airborne bicycle (according to some known as the...

MSRP: $84.60
Now: $76.79
Was:
The British Tank of WWI (so named as it was given the cover name of water tank during development), was undoubtedly one of the more successful military weapons to come out of WWI. It was developed...

MSRP:
Now: $22.49
Was:
ACME-Wood Yard Stick With Metal Ends. This natural wood yard stick features inches to the 1/8in along one side and 1/8yd measurements along the other. Imported.

MSRP:
Now: $17.26
Was:
The Brandy Buddy Bag is for rulers. No, you don't have to own a crown to use it- just put all your craft rulers, knitting needles, border templates, and other long tools in this smart Buddy Bag. The...

MSRP:
Now: $9.65
Was:
Made of thick paper that holds up to chunky markers, gel pens, inks and highlighters for double-sided flashcards, recipes and notes. Score points for neatness with classic blue ruling. The evenly cut...

MSRP:
Now: $10.04
Was:
These 360-degree swivel cords are strong and flexible since they are made of the finest grade material. The cord's coating is silky smooth and color coordinated with the soothing teal color of The...

MSRP:
Now: $10.04
Was:
These 360-degree swivel cords are strong and flexible since they are made of the finest grade material. The cord's coating is silky smooth and color coordinated with the soothing teal color of The...

MSRP:
Now: $14.92
Was:
Knitter's Pride pays tribute to the healing art of knitting with the Mindful Collection Lace Knitting Needles. Inspirational words, specific to each size, are printed on the needle encouraging the...

MSRP:
Now: $97.93
Was:
Canon MP11DX-2 has the perfect combination of efficient and sophisticated features with a compact design for the busy professional. This desktop printing calculator incorporates profit margin...