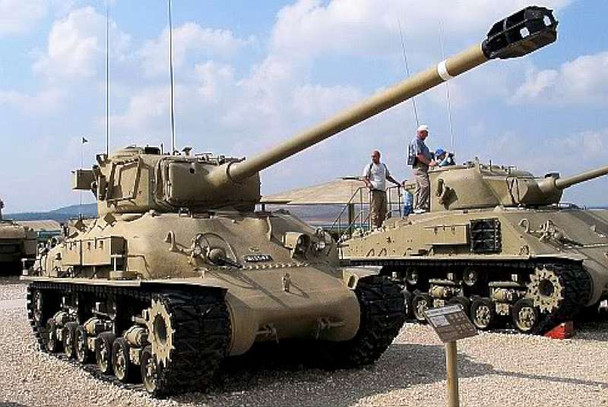 During the 1960's, the Israeli Ordnance Corps upgraded their M4A1 Sherman tanks by equipping them with the powerful French 105mm CN-105-F1 tank gun and they were redesignated as M51s. The larger gun meant a muzzle brake was installed to minimize the greater recoil effect and a counterweight was fitted to the rear of the turret. The 460hp diesel engine and the combination of the Horizontal Volute Spring Suspension (HVSS) and wider T80 tracks gave the M51 improved mobility. During the Six-Day War in 1967, the M51s were used against newer T-54/55 tanks as well as JS-3 tanks from Egyptian, Iraqi, and Syrian armies. The M51's 105mm gun could take on these adversaries by using HEAT ammunition. After the war, these M51s continued to serve with distinction until they were finally retired in the early 1980s. « less
View AllClose

MSRP: $60.00
Now: $51.87
Was:
The late type turret, which was equipped with a one-piece loader's hatch and a muzzle brake, is accurately reproduced based on the thorough study of an actual vehicle. Cast hull is precisely rendered...

MSRP: $58.00
Now: $49.87
Was:
Length: 245mm, Turret with its 90mm long barrel gun and boat hull like underside, have been faithfully reproduced with an incredible level of detail. Crew hatches can be assembled in either the...

MSRP: $19.80
Now: $17.04
Was:
In these early years it specialised in the manufacture of colours for animated films (cartoons). The most sustained expansion of Vallejo started in the nineties, beginning with the introduction of...

MSRP: $27.20
Now: $19.16
Was:
Experience a high-performance gel pen with the Sharpie S-Gel. With no smear, no bleed technology, this Sharpie pen delivers an exceptional writing experience. The gel ink pen features intensely bold...

MSRP:
Now: $7.01
Was:
Nuvo Aqua pens are uniquely designed to create a glitter effect to existing images and media. The perfectly formed brush nib makes the pens extremely versatile and is perfect for adding small...

MSRP: $14.95
Now: $12.67
Was:
KAREN KAY BUCKLEY-Bigger Perfect Circles. Use these circle templates to create perfect circles for both hand and machine applique. This package includes ten different sizes ranging from 2-1/4 to...