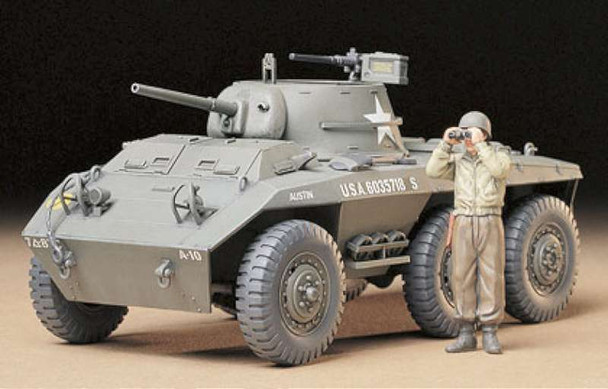 The 6 wheeled vehicles light weight made it a maneuverable vehicle. Development of the M8 began in 1941, and it was originally planned for armor support, but was later shifted to reconnaissance. The Ford company developed a prototype in June, 1942. The Greyhound had a Hercules JXD rear mounted, water cooled engine, capable of generating 110 HP at 3000 r.p.m. The transmission had a 4 speed forward, 1 speed reverse gearbox. The six wheel configuration and engine made the Greyhound a stable vehicle with a maximum speed of 88.5 km/h and range of 563 km. The steel plated armor on the body ranged from 19mm to 32mm thick, the open topped turret had 19mm thick armor. The 12.7mm M2 machine gun was added to the cuppola. The Greyhound was also equipped with an M70D gun sight/telescope. The interior could store up to 80 rounds for the M6, 400 rounds for the 12.7mm machine gun and sometimes 1500 rounds for the 7.62mm machine gun. From March, 1943 to April 1945, over 8523 M8s were produced. They were mainly used in Europe, but they also served in the Pacific. The M8 was supplied to the Allies, including Britain and France. It is the British who nicknamed the M8 Greyhound. Many countries would continue to use the M8 well after this conflict. « less
View AllClose

M8 Greyhound (designed to Be Assembled with Model Kits F

MSRP:
Now: $23.68
Was:
About the British Universal Carrier Mk.II During World War II, Great Britain and its commonwealth Armies used a vast number of small sized, fully tracked weapons carriers, while the American and...

MSRP: $44.00
Now: $39.94
Was:
With the fear that important supplies would not reach the advancing U.S. personnel, the U.S. army called on the reliable and mobile M113. This detailed replica of the actual carrier also features...

MSRP:
Now: $9.37
Was:
The Panzerkampfwagen IV was the predominant tank used by Germany during the World War 2. It was used throughout the conflict and on all fronts. Tank crews mounted a wide variety of tools and...

MSRP: $18.50
Now: $16.90
Was:
During WWII the British Army needed to provide mobility for paratroopers who had been dropped behind enemy lines; their solution was the folding airborne bicycle (according to some known as the...

M8 Greyhound (designed to Be Assembled with Model Kits F