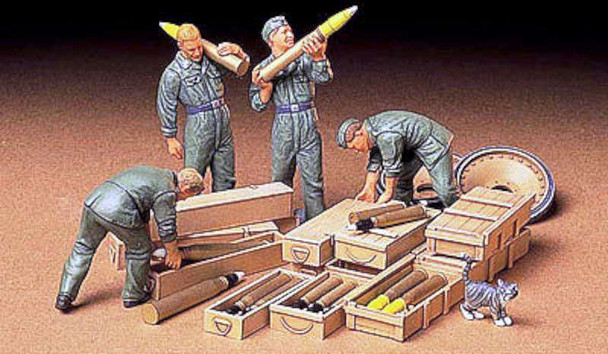 MSRP: $85.00
Now: $69.42
Was:
In 1941, Porsche created a prototype tank which incorporated radical features including a gasoline-electric hybrid powertrain. During the Battle of Kursk, they demonstrated superior anti-armor...

MSRP:
Now: $16.69
Was:
Tamiya 35343 German Artillery Crew Set - Africa Corps Luftwaffe Increase your diorama options even further with this handy figure and accessory set. It contains parts which were previously only...

MSRP: $87.00
Now: $68.35
Was:
This is the 1/35 Scale German Nashorn Heavy Tank Destroyer Plastic Model Kit from the Military Miniature Series by Tamiya. Suitable for Ages 14 & Older.

MSRP: $38.00
Now: $33.95
Was:
Panzer VI Tiger Model Vehicle by Tamiya. The German Tiger I Tank featured a powerful 88mm gun as well as excellent armor and was the greatest opponent to Allied forces during WWII. The late...

MSRP:
Now: $11.92
Was:
And, they offer great quality at a very good value.Includes 34 figures in a variety of poses.This finely detailed plastic model kit requires assembly and painting.

MSRP: $12.95
Now: $12.87
Was:
Formed in 1989 in the city of Most, Eduard began in a rented cellar as a manufacturer of photo etched brass model components. Following the success of their early products, the company branched off...