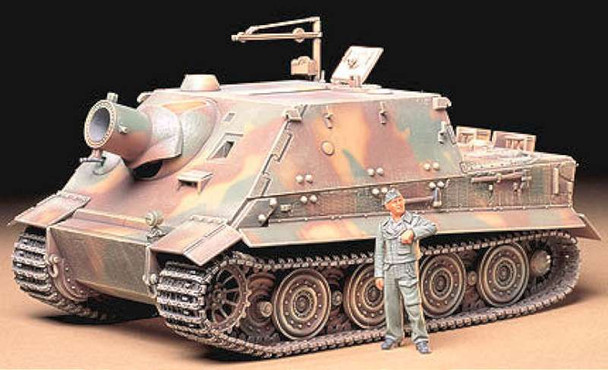 About the German 38cm Assault Mortar SturmtigerA very rare variant of the much feared Tiger I heavy tank, was the Sturmtiger assault weapon that mounted a gigantic 38cm caliber mortar on the tank chassis. Development was initiated in August 1943 and was intended for uses against heavily fortified areas. Th short barreled L/5.4, type RW61 mortar was originally developed by Rheinmetall-Borsig, for the German navys land-based protection against an enemy submarine attack. In order to withstand the heavy recoil of up to 40 tons, the Tiger Is sturdy chassis was selected. A fighting compartment was formed of a boxlike superstructure which was bolted to the lower hull itself. Its armor plate measured 150mm thick at the front and 80mm on the sides. Later, a steel ring counterweight was added to the mouth of the mortar barrel on some vehicles to make elevation aiming easier. The mortars huge self propelled rocket projectile was 149cm long and weighed 330kg. For loading these heavy rockets aboard, a hand cranked crane was mounted to the right aft side of the upper hull. Due to the rockets size, storage space was very limited and only 14 shells could be carried. « less
View AllClose

MSRP: $75.00
Now: $64.40
Was:
During WWII, Finnish forces were very short of adequate armored vehicles such as tanks. Most of the tanks in their possession were obsolete models which were no match for the newer Russian tanks such...