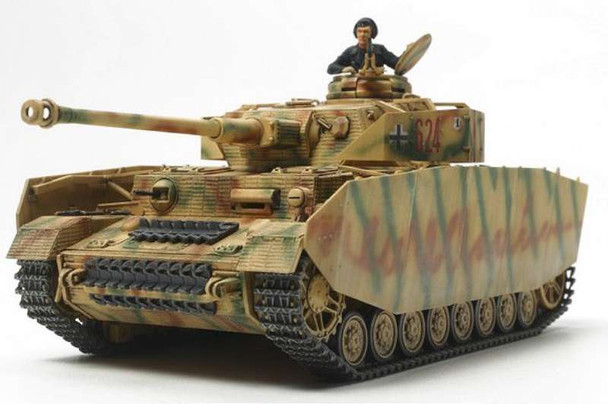 The Panzer IV was one of the most feared weapons in WWII, and would serve German forces throughout the conflict in the guise of a number of variants. The Ausf. H variant itself featured early, middle and late production types, all of which were armed with a L/48 75mm gun and featured Schrzen armor side skirts for greater protection. Late production Panzer IVs were identifiable by their tracks: they lacked a center guide. Upper road wheels had their rubber tires removed and were made into steel wheels, while the tank received cast metal idler wheels. 3,774 Ausf. H Panzer IVs were produced between April 1943 and July 1944, and it was eventually succeeded by the Ausf. The Tamiya model in 1/48 scale captures every detail and nuance of the real life subject thanks to extensive research of the full size vehicle. « less
View AllClose

MSRP: €49,31
Now: €42,50
Was:
The Panzerkampfwagen IV was Germany's most important tank during the second world war. This represented more than one-third of Germany's total wartime tank production. It was the backbone of the...

MSRP:
Now: €9,94
Was:
Simulating Zimmerit on military models using putty enhances the models presence but at the same time it requires advanced skills, and is time consuming. This sticker sheet enables easy reproduction...

MSRP:
Now: €23,03
Was:
About the British Universal Carrier Mk.II During World War II, Great Britain and its commonwealth Armies used a vast number of small sized, fully tracked weapons carriers, while the American and...

MSRP: €322,34
Now: €247,28
Was:
The Panzerkampfwagen IV (Pz.Kpfw. IV) commonly known as the Panzer IV was a German medium tank developed in the late 1930s and used extensively during the Second World War. Decals and 5-view painting...

MSRP: €48,36
Now: €43,45
Was:
About the U.S. M1A1 Abrams with Mine Plow Developed during the early 1980's, the M1 Abrams tank benefited from the latest technological wonders of the time, giving it enormous advantage on any...

MSRP: €206,71
Now: €153,92
Was:
The P-51D Mustang incorporated advanced features such as a laminar flow wing and an efficient radiator design. It was powered by the Packard-built Rolls-Royce Merlin V-1650 engine and it demonstrated...

MSRP: €49,31
Now: €42,50
Was:
The Panzerkampfwagen IV was Germany's most important tank during the second world war. This represented more than one-third of Germany's total wartime tank production. It was the backbone of the...

MSRP: €24,65
Now: €22,73
Was:
German Horch Type 1a 1:48 from Tamiya Item Number:TAM32586 The Horch 1a was developed in accordance with the pre-WWII "Einheits Program," which aimed at streamlining vehicle production. The soft-top...