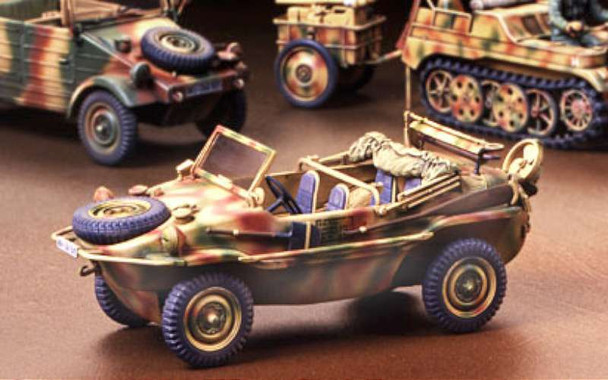 About the Schwimmwagen Designed by Dr. Ferdinand Porsche, the amphibious Schwimmwagen was used by the German land forces, paratroopers and engineering corps during WWII, fulfilling both reconnaissance and liaison duties. Capable of both 2 and 4 wheel drive, the Schwimmwagen was widely respected for its ability to maneuver on a variety of difficult terrain. Featuringa high-set exhaust pipe and a rear mounted 25hp air-cooled 4-cylinder 1,130cc engine, the Schwimmwagen could reach top speeds of up to 80km/h on land and 10km/h in water. Propelled in the water by a screw propeller, which was easily raised above the rear engine deck when driven on dry land, steering whilst in the water was done just like on land, using the front wheels as rudders. Mass-produced from 1942, 14,276 type 166 Schwimmwagen were produced by the end of 1944. About the Model 1/48 scale replica of the Schwimmwagen Type 166 featuring 1/35 Military Miniature series detail. Overall length: 82mm, Overall width: 29mm High-quality interior detailing including dashboard, seats and transparent parts for window. Screw propeller can be assembled in the up or down position. Set includes decals for 2 different markings. « less
View AllClose

MSRP:
Now: $22.61
Was:
VW/Volkswagen Kubelwagen - to be assembled and painted

MSRP: $43.00
Now: $39.84
Was:
Bristols Beaufighter was one of the most successful and widely used twin engines fighter types during WW2. The first series production Beaufighter MK.1 entered service in September 1940. With its...

MSRP: $26.00
Now: $23.97
Was:
German Horch Type 1a 1:48 from Tamiya Item Number:TAM32586 The Horch 1a was developed in accordance with the pre-WWII "Einheits Program," which aimed at streamlining vehicle production. The soft-top...

MSRP: $41.00
Now: $35.14
Was:
Soon after the advent of aircraft and submarines during World War I, the combined operation of those two weapons were considered by many countries. However, it was only the Imperial Japanese Navy...