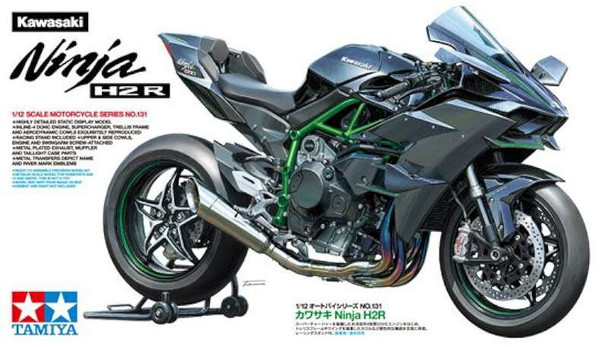 From a show-stopping debut at the INTERMOT show in Cologne in 2014 to later reports of a top speed over 400km/h, the Ninja H2R closed course motorcycle has never been far from the headlines. Its Japanese maker Kawasaki aimed to provide hitherto unexperienced acceleration in its development, going about it by teaming up a 300hp-plus liquid-cooled 998cc inline-4 engine with a centrifugal supercharger, and mounting them in a tubing trellis frame. Four carbon fiber wings on the sleek, angular cowls provide not only an aesthetic treat but also stability at the Ninja H2R's extreme speeds, while the bike boasts cutting edge tech such as traction control, engine brake control, a quick shifter and more. Don't miss your chance to build this expertly molded model of a mold-breaking bike! Features: Detailed inline-4 engine and supercharger depictions. Engine, swing arm, front fork, plus upper, side and seat cowls are attached to frame by minute screws. Features synthetic rubber depictions of front/rear slick tires, plus a separate racing stand part. Metal-plated parts are used to recreate the exhaust, muffler, and taillight case. Comes with decals, plus metal transfers to recreate the Kawasaki River mark and name logos. « less
View AllClose

MSRP: $36.00
Now: $34.04
Was:
Of the many variables that take place during any conflict, supply and mobility are the most pressing. Germany realized this fact very early in World War 2 and demonstrated use of support vehicles...

MSRP:
Now: $17.89
Was:
BEADALON: Deluxe Thing-A-Ma-Jig. Use this to form elaborate loops for jewelry components including necklace links, ornaments, pins and more! This package contains one 4x5 inch thing-a-ma-jig that is...

MSRP:
Now: $10.74
Was:
WILTON-Clear Vanilla Extract. Artificial Flavoring for cakes, cookies, frosting and all of your other baking needs. This flavoring is clear so it won't effect your frosting coloring. Shatter proof...