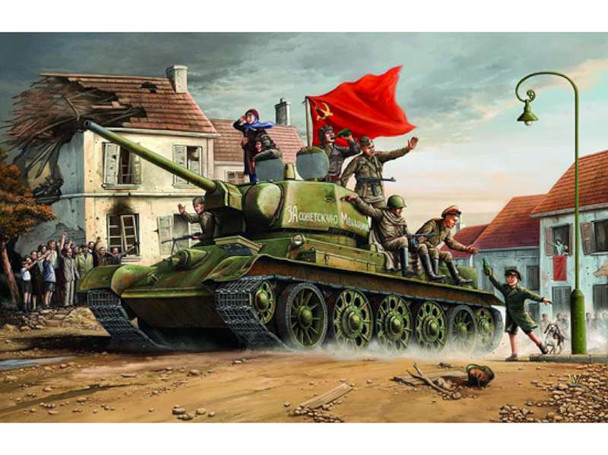 T-34 Model Vehicle by Trumpeter. This kit contains 751 parts and markings for 41st Guards Tank Brigade, 7th Mechanized corps, Kursk, 1943. The T-34 /76 was designed in the 1938 when the Red Army found that the BT-7 would no longer be effective on a modern battlefield. On December 19, 1939 the new vehicle was designated T-34 and ordered into full production.It would take until July of 1940.for production to begin, and by the end of that year only 117 examples would be completed. An order for 600 tanks was placed for the following year. These tanks were to be built at the Stalingrad Tractor Factory and the Kharkov Locomotive Factory (No. All of this would take place under extreme secrecy because of the deteriorating international situation.Re-equipping new units with the T-34/76 was very slow. Many modifications were made to the T-34/76 during its service life. The first was to replace the L/30 76.2mm cannon with a more advanced L/40 gun of the same caliber. Other versions used rolled plate armor on its turret. A later modification had a larger turret with two hatches in place of the original single hatch. A later version with a hexagonal turret had the ability to mount external fuel tanks for increased range. Later models would have a cast turret. The Germans had even designed their latest tank, the Panther, to be superior to the T-34/76. The Soviet army decided to use the larger gun found on the KV-85 in a new version of the T-34. This version came to be known as T-34/85 and entered service in 1943. All work on T-34/76 ended the following year with a total production run of 35,099 tanks in just five years. This kit depicts the 1943 model with "hardedge" cast turret, and mixes of all-steel road wheels and pierced rubber-rimmed road wheels. « less
View AllClose

MSRP:
Now: $40.72
Was:
Stryker Family Model Vehicle by Trumpeter. The LAV-AT is an all-terrain, all-weather vehicle with night capabilities. It is air transportable via C-130, C-141, C-5 and CH-53 E. This vehicle provides...

MSRP: $109.95
Now: $93.95
Was:
Transport, Transport, Panzer 38(t) Model Vehicle by Trumpeter. After good experiences with them in the broad-gauge armored trains, the standard BP 42 was also equipped with two tank-carrier cars with...

MSRP: $109.95
Now: $93.95
Was:
Transport, Transport, Panzer 38(t) Model Vehicle by Trumpeter. After good experiences with them in the broad-gauge armored trains, the standard BP 42 was also equipped with two tank-carrier cars with...

MSRP: $339.95
Now: $260.79
Was:
The Panzerkampfwagen IV (Pz.Kpfw. IV) commonly known as the Panzer IV was a German medium tank developed in the late 1930s and used extensively during the Second World War. Decals and 5-view painting...

MSRP: $399.95
Now: $304.73
Was:
Tracked combat vehicles as well as articulated by the actual driving pins. The kit reproduces inside the thickness of traditional armor reproduction had been omitted.æ? © barrel is one piece of...

MSRP:
Now: $14.58
Was:
LACIS-Third Hand With Clamp. Securely hold one end of your work while you hold the other end when embroidering, running hem stitches or darning! This package contains one third hand with clamp...

MSRP:
Now: $9.16
Was:
The Yarn Valet Ball Winder is a stick used to wind yarn into a uniform, consistent ball. Wind center or outside pull yarn balls without the expense and bulk of traditional yarn winders. It is...

MSRP:
Now: $7.58
Was:
Creates oxidized effects when sprayed with water. Use for quick and easy ink coverage on porous surfaces. Spray through stencils, layer colors, spritz with water and watch the color mix and blend...

MSRP:
Now: $7.41
Was:
Add dimension to your projects with new embossing glaze! These translucent embossing powders are ideal for layering on surfaces. This package contains .49oz of embossing glaze. Conforms to ASTM D...

MSRP:
Now: $18.64
Was:
No glue requiredZvezda presents a new concept of plastic kits which can be assembled without the use of glue; nevertheless keep the high standard of detail.This is the first of a new line of 1/72...