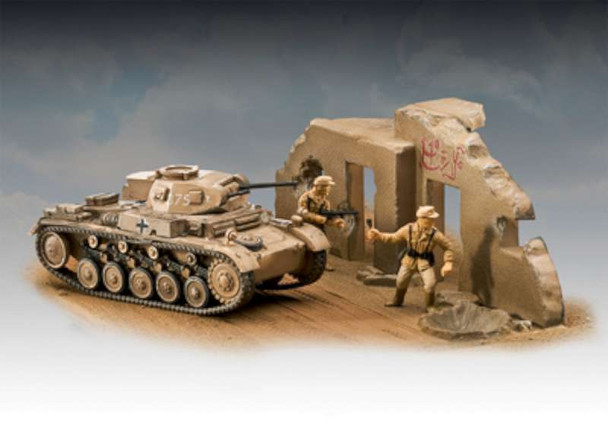 Delays in the production of the first German main battle tanks led to the use of the armoured fighting vehicle II. After successful deployment in Poland and France at the beginning of the Second World War, it was also used in Russia and North Africa, although in the meantime it had become inferior to the enemy tanks. Model-Details: Includes 2 figures Diorama base showing ruins Rotating gun turret Flexible soft plastic tracks Decals for 2 German Africa Corps versions « less
View AllClose

MSRP:
Now: $14.54
Was:
From the manufacturer:From the last desperate days of World War II comes a new Porsche-designed tank to fight for the survival of the Reich! Fresh, totally new ideas on tank design have created this...

MSRP:
Now: $24.42
Was:
A model construction kit of one of the most produced battle-tanks in the world. A choice between either the T-55A or T-55AM (NVA) Detailed anti-aircraft machine gun Rotatable turret Injection moulded...

MSRP:
Now: $7.49
Was:
RANGER-Dylusions by Dyan Reaveley: Ink Spray. This ink spray is a concentrated colorant for use on porous surfaces. Use it on paper, canvas, wood, clay, and more to create fantastic cards,...