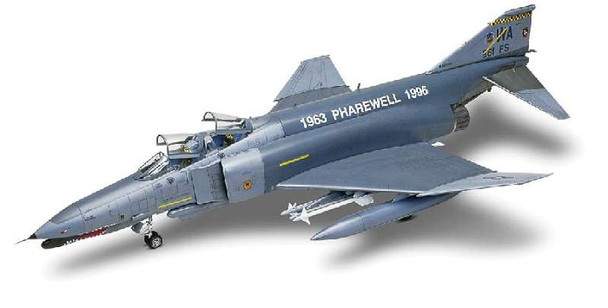 Search and destroy Suppressing enemy air defenses is a crucial, highly demanding, and highly dangerous mission. It amounts, tactically to a deadly game of hide and seek in which hidden SAM batteries try to down lurking aircraft before they themselves are destroyed. The F-4 Phantom II was one of the most potent 'Wild Weasel' aircraft of the last several decades. These aircraft played a key role in conflicts from Vietnam to Desert Storm. Kit features access ladder, choice of two windscreen styles, wide selection of missiles including AGM-78 Standard and AGM-45 Shrike. « less
View AllClose

MSRP:
Now: $14.57
Was:
Delays in the production of the first German main battle tanks led to the use of the armoured fighting vehicle II. After successful deployment in Poland and France at the beginning of the Second...

MSRP:
Now: $45.87
Was:
This is the 1/24 scale Rolls Royce Phantom II plastic model by Italeri For ages 10 years and up FEATURES: Highly detailed plastic pieces molded in tan - black - grey

MSRP:
Now: $7.78
Was:
Red Heart-Soft Yarn. Soft yarn features an ultra soft hand and subtle luster and is an excellent all-purpose yarn. It has an elegant drape that is ideal for fashion looks. Weight category: 4, 100%...

MSRP:
Now: $10.85
Was:
WILTON-Fondant Rolling Pin. Use this handy, non-stick tool to roll out fondant for all kinds of cake and cookie decorating. This package contains one 9x1x1 inch Fondant Roller, two 1/8 inch guide...

MSRP:
Now: $10.68
Was:
WILTON-Recipe Right: Biscuit/Brownie Pan. Recipe Right pans are constructed of heavy-gauge steel that provides an even heating performance. The non-stick coating makes food release and clean-up a...