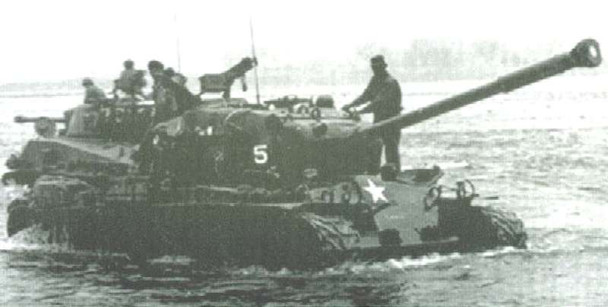 Almost three years of intensive development finally bore fruit with the introduction of theT26E3 "General Pershing" into battle during the closing months of European War. After its baptism of fire, the Pershing was standardized as the M26 in late March 1945. In 1948, the first improved M26A1s were accepted. These tanks were armed with the 90mm gun M3A1 in the combination gun mount M67A1. The M3A1 was fitted with a bore evacuator and a lighter, single-baffle muzzle brake. The M67A1 mount had a lighter equilibrator spring since the M3A1's lighter muzzle brake imparted less torque upon firing. M26A1 also had a modified gun travel lock, and some vehicles were fitted with a gun elevation stabilizer. « less
View AllClose

MSRP: $109.95
Now: $93.59
Was:
Transport, Transport, Panzer 38(t) Model Vehicle by Trumpeter. After good experiences with them in the broad-gauge armored trains, the standard BP 42 was also equipped with two tank-carrier cars with...

M3A1 Stuart Exterior (designed to Be Assembled with Mode

MSRP:
Now: $37.06
Was:
The Sherman in its many versions was the most widely used tank employed by the allied forces in World War II. Even today, several armies are still using this formidable tank. More than 40000 M4s were...

MSRP:
Now: $7.19
Was:
These delightful embellishments are the perfect finishing touch for any project! This 3.75x8 inch package contains 40 assorted die-cut pieces. Imported.

MSRP:
Now: $91.17
Was:
This versatile all-purpose cleaner is a bactericidal, virucidal, and fungicidal product which cleans, disinfects, deodorizes and whitens. It is effective against a multitude of microorganisms...

MSRP:
Now: $5.86
Was:
COATS & CLARK-Machine Quilting Thread. This thread is made of 100%, extra long staple Egyptian Cotton. It is mercerized for luster and strength and features excellent sew-ability on natural fibers...