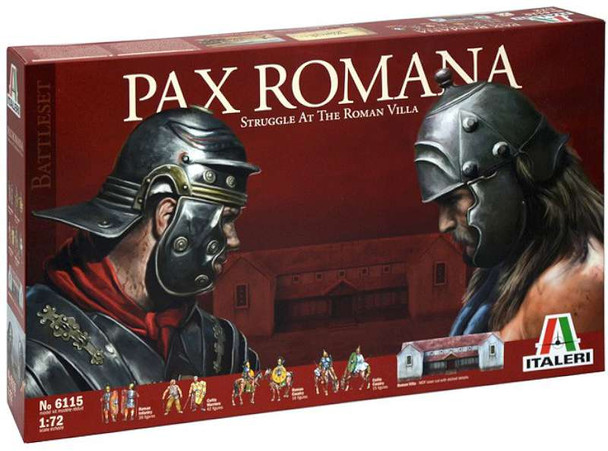 ITALERI 1/72 Pax Romana Battle Set Plastic Model Kit (6115S) After hundreds of years of war and expansion, the "Pax Romana", begun under Emperor Augustus, was a time of relative stability and little expansion. This peace, however, relied on the positioning of large forces in Roman border areas to tamp down unrest. This set allows you to duplicate the tense situation on the frontier with a Roman Villa, forty-two Celtic infantry and fifteen horsemen, thirty-six Roman infantry and sixteen horsemen, as well as a full painting guide. « less
View AllClose

MSRP:
Now: $21.40
Was:
This is the 1/72 Scale Roman Imperial Legionaries from Zvezda. Suitable for Ages 10 & Up. FEATURES: 52 unpainted soldiers in various poses Ideal for creating dioramas INCLUDES: Fifty-two figures...

MSRP:
Now: $15.38
Was:
Minor assembly required, detailed painting instructions. These sets come with a variety of figures and horses and accessories, many warriors are attacking on foot and Horses with axes and swords and...

MSRP:
Now: $15.74
Was:
Highly detailed plastic pieces molded in beige. 48 figures in different poses. Mounted and foot soldiers. Painting guide is on the back of the box. Forty-eight figures. REQUIREMENTS Assembly Hobby...