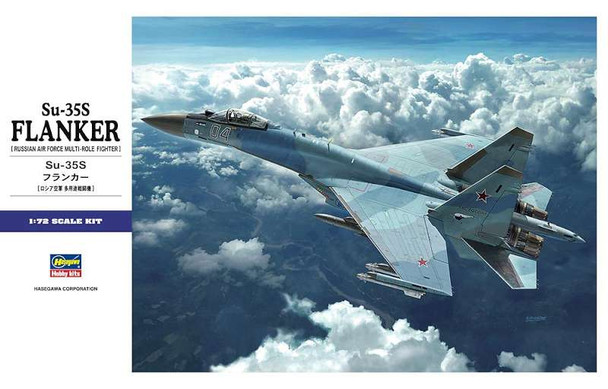 Further fitting-out the 'Flanker' Technically, the Su-35S is a modified Su-27. But since the Su-35S is loaded with improved avionics, vectored thrust engines, additional hardpoints for weapons and more it's practically a whole new airplane. Its Mach 2.25 speed and over 17,000 lbs (8,000 kg) of ordnance capacity is extremely impressive. Its speed, ordnance capacity and range are all greater than comparable American and European airframes. Even with all its impressive performance, the Su-35S is only intended as a stopgap for until Russia's fifth generation fighter is released. Kit features a display stand and decals. Decal Options: Russian Air Force « less
View AllClose

MSRP:
Now: $21.98
Was:
Description Japan Import. - We promise to supply genuine product in Japan. - If you have questions please feel free to ask us. - International Buyers - Please Note:All items are delivered from Japan...

MSRP:
Now: $96.77
Was:
SUPER DECALS SHEETS FOR 4 VERSIONS - COLOR INSTRUCTIONS SHEET INCLUDED The B-52 Stratofortress is the most famous long range jet-powered strategic bomber in the aviation history. Produced by the...

MSRP:
Now: $15.92
Was:
ACME-Wood Yard Stick With Metal Ends. This natural wood yard stick features inches to the 1/8in along one side and 1/8yd measurements along the other. Imported.

MSRP:
Now: $7.43
Was:
SIMPLE STORIES-Sn@p! Photo Flips For Binders. A snappy way to capture your colorful life! It is easy to add additional photos and cards. Simply insert a photo, peel the adhesive backing and stick to...

MSRP:
Now: $9.72
Was:
WILTON-Fondant Rolling Pin. Use this handy, non-stick tool to roll out fondant for all kinds of cake and cookie decorating. This package contains one 9x1x1 inch Fondant Roller, two 1/8 inch guide...