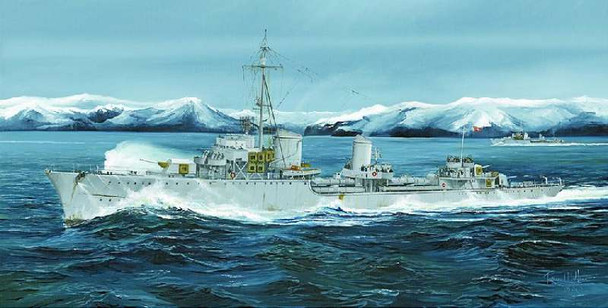 Z-25, a Type 1936A destroyer, was commissioned on November 30th, 1940. During the war, her forward gun was replaced by a twin turret and the anti-aircraft armament was increased. In March 1942, Z-25, Z-24, Z-26 and U-boats intercepted PQ-13 which was a British Arctic convoy. From late April to early May, Z-25 attack convoy QP-11 together with another two destroyers. She was taken over by France after the war and Scrapped in 1958. « less
View AllClose

MSRP: $17.99
Now: $14.64
Was:
These tools offer optimal optimal balance of size, power and precision. This 3.75x10.375 inch package contains one screwdriver. The free-rotating handle leverages strength and the quick-flip...

MSRP:
Now: $43.96
Was:
Acrylic Varnish should never be applied until the paint has dried completely, and it is recommended to wait at least 24 hours. Varnish should be applied in fine coats at approximately 5 to10 minutes...

MSRP:
Now: $51.83
Was:
Folded paper towels are absorbent for everyday use. Fold allows easy dispensing of one towel per pull. Use in breakrooms, washrooms and wherever a hand towel is needed. Towel/Wipe Type: Multi-Fold...

MSRP:
Now: $9.05
Was:
ADVANTUS-Glitter. It's easy to add sparkle and shine to any project with this shaker bottle of glitter! Each package contains one 8 ounce bottle of glitter. Available in a variety of colors (each...

MSRP:
Now: $8.43
Was:
ADVANTUS-Glitter Glue. Add sparkle and shine to any project with this glitter-infused glue! This package contains one 8 fl.oz. bottle of glitter glue. Available in a variety of colors (each sold...

MSRP:
Now: $11.10
Was:
Learn to crochet by creating your own adorable crafting companion! These crochet kits from Stitch Kids include everything you need to create a super cute animal. Complete with yarn, stuffing and...

MSRP:
Now: $7.75
Was:
FOUR SEASONS FLOWERS-Excelsior. Straw Weavers brand excelsior in a 3 ounce bag is of the finest material in Green to enhance any project or arrangement. Crafter and florists will find the product...