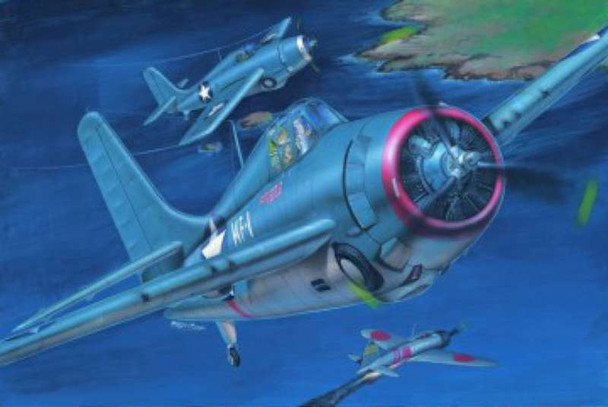 Contains 267 parts and markings for Robert Glaer, VMF-244 Guadacanal 1942. Grumman's short and stubby-winged F4F Wildcat is one of its best-known and successful fighters. The F4F-3 Wildcat had a rather short, rounded fuselage with mid-wings of rectangular shape. The wings did not fold for carrier storage. This concentration of weight made for a quick handling, maneuverable fighter. Its Pratt & Whitney 1200hp, 14-cylinder, air-cooled, twin row radial engine (R-1830-76 or 86) gave it a top speed of 330 mph. The F4F-3 had a range of 845 miles. The standard armament was four .50 caliber wing mounted machine guns. Service ceiling was 37,500 ft. The F4F-3 offered good durability, pilot armor, and a high dive speed. It also had good maneuverability, although it was soon discovered that it could not compete with the Japanese Zero in this area. A common complaint from pilots was the manual hand-cranked retracting landing gear, which required 30 cranks. One slip could result in a serious wrist injury. Powerplant: P&W 1,200hp R-1830-36 14-cylinder radial engine. « less
View AllClose

F-4N Phantom (self adhesive) (designed to Be Used with M

MSRP: $47.95
Now: $40.52
Was:
The Messerschmitt Bf 109 was a German World War II fighter aircraft designed by Willy Messerschmitt in the early 1930s. It was one of the first true modern fighters of the era, including such...

MSRP: $74.95
Now: $64.98
Was:
Important! The kill markings in the pictures above are no longer part of this kit due to legal issues at Trumpeter.

MSRP: $72.95
Now: $63.66
Was:
The P-51 Mustang, designed in 1940 after Great Britain requested.Mustangs served in nearly every active combat zone, including the Pacific where they escorted B-29s from Iwo Jima to Japan. Between...