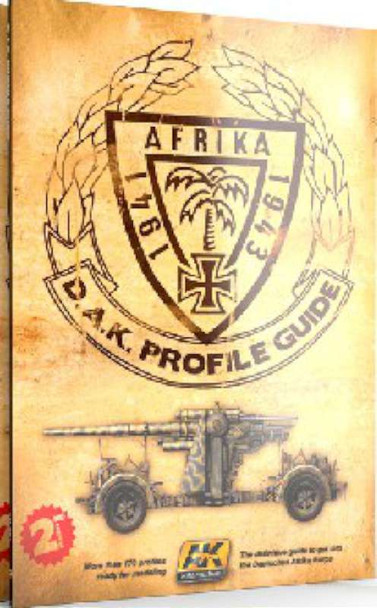 This book shows the original German camouflage of vehicles usedby the Deutsche Afrika Korps, with color variants throughout the war.We look at German Army vehicle colours for the African campaign,including the European Dark Gray (RAL 7021) in which they arrivedto Libya. This continues through to the initial camouflage colours, Yellow-Brown RAL 8000 with Green-Gray spots RAL 7008 (in 1941), andthe new Yellow-Brown RAL 8020 and Sand Gray RAL 7027, used from1942. We also include a selection of Italian vehicles, often forgotten,which fought alongside the Germans against the Allies from 1941 to1943. This is supplemented by the addition of allied vehicles servingwith the Axis troops, with some curious American halftracks on a doublepage spread, with distinctive German markings, from 1943. Over170 profiles cover schemes from the most common camouflage to themost original and unusual vehicles used by the DAK and Regio Esercito,including major artillery pieces used in Africa, highlighting aboveall the powerful 88 mm Flak 18/36/37. Through the 108 pages of thisbook, you will fi nd inspiration for your next African modelling project;projects that you can enhance further with the AK 550 Africa KorpsColors Acrylic Set, and the AK 068 DAK Weathering Set. « less
View AllClose

MSRP: $24.99
Now: $23.33
Was:
AK Interactive Panzer Crew Uniforms Painting Guide Book -- Hobby and A deep look on these armored troops and its paint, a new AK Learning Series issue. In this release, we find many painting articles...

MSRP:
Now: $10.31
Was:
AK Interactive Fuel Stains Enamel Paint 35ml Bottle -- Hobby and The definitive mixture to make fuel spilled effects in any type of modern or classic vehicle. This is not product to make oil and...

MSRP:
Now: $9.91
Was:
AK Interactive Odorless Enamel Thinner 35ml Bottle -- Hobby and This property of the odorless thinner (Turpentine) makes it great for delicate, soft and subtle blending. This thinner is exclusive to...

MSRP: $23.99
Now: $21.29
Was:
AK Interactive NATO Camouflage Enamel Paint (74, 75, 76) -- Hobby This weathering set was developed with modern armor enthusiasts. We have designed this special set that contains all the necessary...

MSRP: $26.99
Now: $23.81
Was:
AK Interactive Iraq & Afghanistan Acrylic Paint -- Hobby and This six color set allows you to paint the sand colored paint schemes as seen on vehicles recently deployed in Afghanistan and Iraq. The...

MSRP:
Now: $11.57
Was:
Its superb adhesion qualities combined with a matt-satin fi nish make our primer the perfect choice for preparing models for painting. Only a light layer of primer is required for full, effective...

MSRP:
Now: $9.91
Was:
AK Interactive Worn Effects Acrylic Paint 35ml Bottle -- Hobby and Odorless and effective acrylic product to replace hairspray and to do effects of wear and scratches on models..

MSRP: $26.99
Now: $24.42
Was:
AK Interactive German War Colors 1937-44 Acrylic Paint -- Hobby and The German army used several ordinances for camouflage on their vehicles during WWII. This set includes the most important colors...