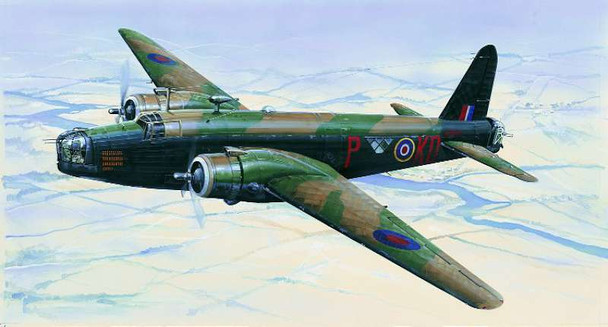 Contains 639 parts. The Wellington was the most important British bomber of the initial war period. The prototype first flew in June 1936. Deliveries to RAF bomber squadrons began in 1939. During war period it operated from bases in Great Britain, India, the Middle East, North Africa and Italy. Although fairly modern by its looks, technologically the Wellington was very much a product of an era past. By 1942 slow speed, limited ceiling, and a small bomb load made the Wellington obsolete in the European theatre of operations. Although once it had been supplanted from the European theatre Lancasters and Halifaxes it flew until the war's end in other roles and in other theatres. In particular, it had been used by RAF. as trainer until 1953. A total of 11,461 Wellington's of all variants were built - the most of any British bomber design. « less
View AllClose

MSRP:
Now: $15.15
Was:
Thinlits create dazzling detailed shapes for more creative cardmaking and papercrafting projects. The wafer-thin chemically-etched dies are designed to cut, emboss or stencil a single sheet of...

MSRP:
Now: $17.93
Was:
Prima silicone molds for beautifully dimensional goodies to embellish your decor and craft projects. And they play well with so many types of media- air dry clay, polymer clay, earthen clay, hot...