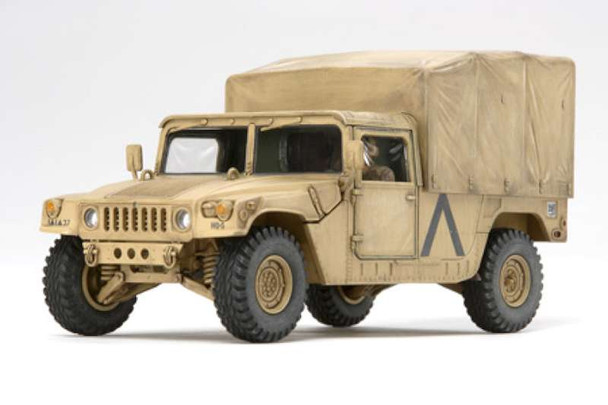 325631:48 United States of America 4x4 Utility Cargo VehicleThis model is the first 1/48 U.S 4x4 utility vehicle Tamiya has produced in the 1/48 scale military miniature series. Developed in the late 1970s, the US military released the U.S 4x4 utility vehicle to replace the M151 MUTT and M561 in missions. This 4x4 utility vehicle allowed the U.S military to perform various missions with one car. The vehicle was known for its off-road mobility and dependability. The U.S 4x4 vehicle was versatile because of its lightweight and exceptional performance. The aluminum body and strong steel frame allowed it to take on roles such as cargo/troop transport, ambulance, and armament carrier. The vehicle included a 4-wheel independent suspension, 4WD system, and a 150hp V8 diesel engine that allowed it to reach top speeds of 105km/h. The most popular version of this vehicle was the "Cargo Type", which included a large rear deck area to hold 1,100kg of cargo or eight infantrymen. These vehicles first were used in Panama in 1989 and since have been used in the 1991 Gulf War. « less
View AllClose

MSRP:
Now: $16.54
Was:
Innovative Home Creations-6 Shelves Yarn & Craft Organizer. Organize all of your yarn and crafts compactly in the same storage space! This organizer hangs from a standard-sized closet rod and...

MSRP:
Now: $21.14
Was:
Woodland Scenics Works great for making your own hopper loads, rocks, or other molds. This ready-to-use Latex Rubber is formulated to be thin enough to seek detail and thick enough to be durable...

MSRP:
Now: $15.92
Was:
This is a Set of N Scale Engineers from Woodland Scenics. FEATURES: Each figure has been sculpted and painted with superb detail. Molded in various poses: Includes four standing and two sitting...

MSRP:
Now: $15.84
Was:
These are Scenic Accents? People Walking by Woodland Scenics?.

MSRP:
Now: $114.05
Was:
This is the N Scale Curved Tunnel for Your Model Railroad Layout from Woodland Scenics. Gypsum. For further information on installing tunnel portals, as well as complete instructions for creating...